10 Big Ideas from Mindset: The New Psychology of Success 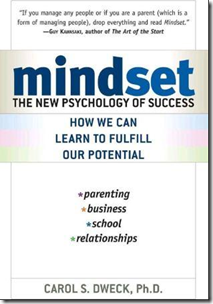 “Becoming is better than being.” — Carol S. Dweck

What if you could break the chain of limiting thoughts about who you are and all you could be?

What if you could embrace challenges, struggles, criticisms, and setbacks as a source of growth?

That’s what a growth mindset is all about.

In a fixed mindset, people believe their basic qualities, like their intelligence or talent are simply fixed traits.

In a growth mindset, people believe that their most basic abilities can be developed.

In the book, Mindset: The New Psychology of Success: How We Can Learn to Fulfill Our Potential, Carol Dweck shares how a simple idea about the brain can create a love of learning and a resilience that is the basis of great accomplishment in every area of work and life.

Here are 10 big ideas from the book that I think will help you embrace your challenges and growth opportunities to realize your potential and enjoy the journey, no matter the tough stuff that life throws your way .

1. Adopt a Growth Mindset and Focus on Learning Over Achievement.

When you focus on a growth mindset, you embrace all the things that have felt threatening: challenge, struggle, criticism, and setbacks.

When you embrace the tough stuff, you open yourself up to fully realize your potential and all that you can be.  Instead of depending on luck or “natural” talent, you focus on developing your skills and abilities, and learning from your efforts.

2. You Can Change Your Mindset.

The good news is that even if you currently have a fixed mindset, it’s not a fixed thing.

“Mindsets are an important part of your personality, but you can change them.  Just by knowing about the two mindsets, you can start thinking and reacting in new ways.  People tell me that they start to catch themselves when they are in the throes of the fixed mindset — passing up a chance for learning, feeling labeled by a failure, or getting discouraged when something requires a lot of effort.  And then they switch themselves into the growth mindset — making sure they take the challenge, learn from the failure, or continue their effort. “

3. You Can Put Yourself into a Growth Mindset

You can try a growth mindset on for size, even if it’s just temporary.  You can even do it on the spot.

“It’s also important to realize that even if people have a fixed mindset, they’re not always in that mindset.  In fact, in many of our studies, we put people into a growth mindset.  We tell them that an ability can be learned and that the task will give them a chance to do that.  Or we have them read a scientific article that teaches them the growth mindset.  The article describes people who did not have natural ability, but who developed exceptional skills.  These experiences make our research participants into growth-minded thinkers, at least for the moment — and they act like growth-minded thinkers, too.”

4. The Growth Mindset Allows You to Love What You’re Doing

“The growth mindset does allow people to love what they’re doing — and to continue to love it in the face of difficulties.  The growth-minded athletes, CEOs, musicians, or scientists all loved what they did, whereas many of the fixed-minded ones did not.

5. The Growth Mindset Makes It Worth It, Regardless of the Outcome

With the fixed inset, unless you win, you lose.  But with the growth mindset, the journey is the reward, even when things don’t go as planned.

“In the fixed mindset, everything is about the outcome.  If you fail — or if you’re not the best — it’s all been wasted.  The growth mindset allows people to value what they’re doing regardless of the outcome.  They’re tackling problems, charting new courses, working on important issues.  Maybe they haven’t found the cure for cancer, but the search was deeply meaningful.”

6. See Your Relationships from a Growth Mindset.

Your relationships change when you let go of your ideal images and think of them from a growth standpoint.

“Picture your ideal love relationship.  Does it involve perfect compatibility — no disagreements, no compromises, no hard work? Please think again.  In every relationship, issues arise.  Try to see them from a growth mindset: Problems can be a vehicle for developing greater understanding and intimacy.  Allow your partner to air his or her differences, listen carefully and discuss them in a patient and caring manner.  You may be surprised at the closeness this creates.”

7. Artistic Ability Can Be Developed Far Greater than What You’re Born With

Just because some people seem naturally good at something, doesn’t mean that others can’t do it, and sometimes even better with training.

“Edwards agrees that most people view drawing as a magical ability that only a select few possess, and that only a select few will ever possess.  But this is because people don’t understand the components — the learnable components — of drawing.  Actually, she informs us, they are not drawing skills at all, but seeing skills.  They are the ability to perceive edges, spaces, relationships, lights and shadows, and the whole.  Drawing requires us to learn each component skill and then combine them into one process.  Some people simply puck up these skills in the natural course of their lives, whereas others have to work to learn them and put them together.”

8. Physical Skills Can Be Developed Far Greater than What You’re Born With.

Do you think the fastest woman on earth was born that way?

Wilma Rudolph, hailed as the fastest woman on earth after she won three gold medals for sprints and relay in the 1960 Rome Olympics, didn’t start out so “lucky.”

She was far from a physical wonder as a youngster.  She was a premature baby, the twentieth of twenty-two children born to her parents, and a constantly sick child.  At four years of age, she nearly died of a long struggle with double pneumonia, scarlet fever, and polio, emerging with a mostly paralyzed left leg.  Doctors gave her little hope of using it again.  For eight years, she vigorously pursued physical therapy until at age twelve she shed her leg brace and began to walk normally.”

Parents, teachers, and coaches shape mindsets through their actions and words.

Praising children’s intelligence harms their motivation and it harms their performance.  Parents think they can hand children permanent confidence — like a gift — by praising their brains and talent.  It doesn’t work, and in fact has the opposite effect.  It makes children doubt themselves as soon as anything is hard or anything goes wrong.  If parents want to give their children a gift, the best thing they can do is to teach their children to love challenges, be intrigued by mistakes, enjoy effort, and keep on learning.  That way, their children don’t have to be slaves of praise.  They will have a lifelong way to build and repair their own confidence.”

10. We All Have Interests that Can Blossom into Abilities.

Don’t let a fixed mindset hold you back from what you’re capable of.

“The same is true for every prodigy Winner describes.  Most often people believe that the ‘gift’ is the ability itself.  Yet what feeds it is that constant, endless curiosity and challenge seeking.

Enjoy the process of becoming what you’re capable of.

In the words of Steve Maraboli:

“Once your mindset changes, everything on the outside will change along with it.”

Don’t Let the Great Writer, the Great Athlete, or the Great Genius Hold You Back

7 Power Questions to Start Your Day
Next Post:6 Steps to Emotional Mastery