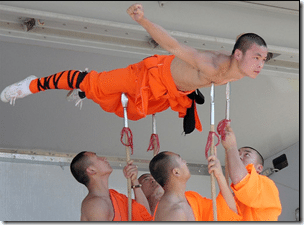 “They can because they think they can.” – Virgil

If you know the sources of beliefs, you can model the beliefs that help you foster excellence.

Early on, I filled my head with extraordinary people, amazing feats, unbelievable achievements, and fantastic stories.

I wanted to create a world of possibility.

Did it pay off?   It helped me break records and set a higher bar.  And, just about every day, whenever I hit a setback or think something might be impossible, I draw from the many great books, great people, and great quotes to remind myself just how high a bar “impossible” really is, and to keep things in proper perspective.

Beliefs play a big role in what’s possible or impossible in our lives.

You’ve probably heard of the “fortune cookie effect”, or Self-fulfilling Prophecies, or the Pygmalion Effect, where you get what you expect.

Beliefs can also filter how we see the world and who’s in it.  For example, you might have heard of the Halo Effect.   The Halo Effect is a cognitive bias where your judgments of a person’s character can be influenced by your overall impression of him or her.   Similarly, the Horn Effect, is where we use one bad quality or negative experience to cloud our view of a person’s better qualities.

Once you know the sources of your beliefs, you can feed from better sources so you can consciously create more empowering beliefs.

In the book, Unlimited Power: The New Science of Personal Achievement, Tony Robbins shares 5 sources of beliefs that you can use to foster your personal excellence.

What are Beliefs and Where Do They Come From?

It can help to start with an understanding of what beliefs are.  According to Tony Robbins, “They are preformed, pre-organized approaches to perception that filter our communication to ourselves in a consistent manner.”

Here are 5 sources of beliefs, according to Tony Robbins, that you can use to create more personal excellence in your life:

“The first source is the environment.  This is where the cycles of success breeding success and failure breeding failure are played out in the most relentless fashion.  The real horror of ghetto life is not the daily frustrations and deprivations.  People can overcome those.  The real nightmare is the effect the environment has on beliefs and dreams.  If all you see is failure, if all you see is despair, it’s very hard for you to form the internal representations that will foster success.

Environment may be the single most potent generator of belief, but it’s not the only one.  If it were, we’d live in a static world where children of wealth would know only wealth, and the children of poverty would never rise above their origins.  Instead, there are other experiences and ways of learning that can also be incubators of belief.”

The events in our life, large or small, can help foster beliefs.  Robbins shares a story about how he got an interview with Howard Cosell and it changed his beliefs of what was possible in life.

“Somehow I ducked under several reporter’s arms and approached Mr. Cosell.  Speaking at lightening speed, I told him what I was doing and asked for a brief taped interview.  With dozens of reporters waiting, Howard Cosell gave me a personal interview.  That experience changed my beliefs about what was possible, who in life was approachable, and what the rewards were for asking what I wanted.  Because of Mr. Cosell’s encouragement, I went on to write for a daily newspaper and developed a career in the communication’s field.”

Knowledge is power.  We can draw from books, people, and quotes to create new beliefs.

“A third way to foster belief is through knowledge.  A direct experience is one form of knowledge.  Another is gained through reading, seeing movies, viewing the world as it is portrayed by others.  Knowledge is one of the great ways to break the shackles of a limiting environment.  No matter how grim your world is, if you can read about the accomplishments of others, you can create the beliefs that will allow you to succeed.   Dr. Curvin, a black political scientist, wrote in The New York Times how the example of Jackie Robinson, the first black player in the major leagues, changed his life when he was a youngster.  ‘I was enriched by my attachment to him; the level of my expectations was raised by his examples.”

You can’t argue with results.  If you did it before, you can do it again.

“A fourth way that results are created is through our past results.  The surest way to create a belief that you can do something is to do it once, just once.  If you succeed once, it’s far easier to form the belief that you’ll succeed again.  I had to write the first draft of this book in less than a month to make the deadline.  I wasn’t sure if I could do it.  But when I had to do a chapter in a single day, I found I could do it.  And once I had succeeded with one, I knew I could do it again.  I was able to form the belief that allowed me to finish this book on time.

Journalists learn the same thing about writing on deadline.  There are few things in life as daunting as having to knock out a full story in an hour or less under daily deadline pressure.  Most beginning journalists dread it more than any part of their job.  But what they find is that they succeed once or twice, they know they’ll succeed in the future.  They don’t get smarter or quicker s they get older, but once empowered with the belief that they can knock out a story in whatever time is available, they find they can always do it.  The same is true for comedians, businessmen, or people in just about any other walk of life.  Believing it can be done becomes a self-fulfilling prophecy.”

Just as you can draw from past results, you can imagine future results, and you can vividly imagine creating new experiences and outcomes.   This will help you shape your beliefs in a more conscious way.

“The fifth way to establish beliefs is through the creating in your mind of the experience you desire in the future as if it were here now.  Just as past experiences can change your internal representations and thus what you believe is possible, so can your imagined experience of how you want things to be in the future.  I call this experiencing results in advance.  When the results you have around you are not supporting you in being in a powerful and effective state, you can simply change the world the way you want it to be and step into that experience, thereby changing your states, your beliefs, and your actions.”

You’re not a leaf in the wind.  You can change your beliefs.

“All these things are ways to mobilize belief.  Most of us form our beliefs haphazardly.  We soak up things – good and bad – from the world around us.  But one of the key ideas of this book is that you’re not just a leaf in the wind.  You can control your beliefs.  You can control the ways you model others.  You can consciously direct your life.  You can change.  If there’s a key word in this book, that’s it – change.”

“Your internal representations and beliefs work in much the same way.  If you don’t like them, you can change them.  We all have a hierarchy of beliefs.  We have core beliefs, things that are so fundamental we would die for them.  Those are things like our ideas about patriotism and family and love.  But most of our lives are governed by beliefs about possibility or success or happiness that we’ve picked up unconsciously over the years.   The key is to take those beliefs and make sure that they work for you, that they’re effective and empowering.”

“The truth is it’s easier to make $100,000.  Let me tell you why.  If your goal is to make $10,000, what you’re really trying to do is make enough to pay the bills.  If that’s what your goal is, if that’s what you represent to yourself, about why you’re working so hard, do you think that you will be in an excited, empowered, and resourceful state as you work?  Are you seething with excitement, thinking, Boy, oh, boy.  I’ve got to get to work so I can make enough to pay my lousy bills?  I don’t know about you, but that doesn’t get my motor running.

But selling is selling.  You have to make the same calls, meet the same people, deliver the same products, no matter what you’re hoping to achieve.  So it’s a lot more exciting, a lot more enticing, to go out with the goal of making $100,000 than $10,000.  And that state of excitement is much more likely to activate your taking the kinds of consistent actions that will tap your higher potential than just hoping to go out and make a living.”

Can you change the world?

We Change When We Change Our Mental Representation

How Tony Robbins Designs His Ideal Day
Next Post:7 Beliefs for Personal Excellence