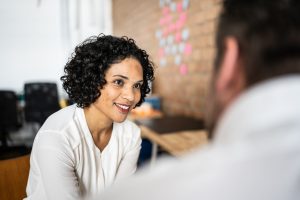 “You cannot reason people out of a position that they did not reason themselves into.”  — Ben Goldacre

The Law of Influence is a powerful one.

The Law of Influence is how people who influence without authority improve their effectiveness.

This is a big deal.

As smart people put together logical arguments, the arguments all fall down.

Emotion trumps them.     But even if you appeal to the emotions, you can still get trumped by character.

The Law of Influence Explains a Lot

Have you ever wondered why people don’t always choose “the logical choice” or “the reasonable solution”?

The human mind can rationalize anything in irrational ways.

It’s how we fool ourselves into lesser choices or stick to our decisions despite the data or how we argue for something that’s a fallacy of the mind.

It’s how influencers can influence the masses without actually having a smart point-of-view or position.

Smart people tend to focus on the merits of the argument.   They focus on the reasons.   To argue their point, they argue more data.

But then they get upset when the room or the crowd or the masses sway the other way.

How could anybody not choose the “obvious” right choice when presented with such great facts?

Because that’s not how the Law of Influence works.

For an example of character, think about the impact of the right people in the room asking the right questions.

This does not mean focus on character and emotion at the expense of logic.

It means understand the impact of character and emotion and adjust and adapt accordingly if you really need your message to make an impact and you need to influence people in the real world.

To Influence Better, Win the Heart the Mind Follows

If you win the heart, the mind follows.

On the other hand, if you win the mind, the heart doesn’t always follow.

That doesn’t sound fair, does it?

You can wish it wasn’t that way.  You can say that’s now how the world should work.

Or you can embrace the Law of Influence and realize that to win people over, you need to win their heart, not just their mind.

When you know this secret, it all makes sense.  You didn’t need more data to make your point.  You needed a moving story.  When you walk into the room, it’s not what you say or how you say it … people will go with whatever Frodo says, so you better have him on your side.

In Thank You for Arguing: What Aristotle, Lincoln, and Homer Simpson Can Teach Us About the Art of Persuasion, Jay Heinrichs writes about arguments by logos, ethos, and pathos.

I’ve highlighted some relevant points from Thank You for Arguing.

According to Heinrichs, Aristotle had a Big Three:

Logos is argument by logic.

“Logos is argument by logic.  If arguments were children, logos would be the brainy one, the big sister who gets top grades in high school.

It doesn’t just follow the logical rules; instead, its techniques use what the audience itself is thinking.”

Ethos is argument by character.

“Ethos, or argument by character, employ’s the persuader’s personality, reputation, and ability to look trustworthy.  (While logos sweats over its GPA, ethos gets elected class president.)

In rhetoric, a sterling reputation is more than just good; it’s persuasive.  I taught my children that lying isn’t just wrong, it’s unpersuasive.

An audience is more likely to believe a trustworthy persuader, and to accept his argument.  “A person’s life persuades better than his word,” said one of Aristotle’s contemporaries.  This remains true today.  Rhetoric shows how to shine a flattering light on your life.”

Pathos is argument by emotion.

“Then you have pathos, or argument by emotion, the sibling of the others disrespect, but who gets away with everything.

Logicians and language snobs hate pathos, but Aristotle himself – the man who invented logic – recognized its usefulness.

You can persuade someone logically, but as we saw in the last chapter, getting him out of his chair to act on it takes something more combustible.”

“Logos, ethos, and pathos appeal to the brain, gut, and heart of your audience.  While our brain tries to sort the facts, our gut tells us whether we can trust the other person, and our heart makes us want to do something about it.  They form the essence of effective persuasion.”

Your Opponent’s Logic and Your Audience’s Emotion

You can play off logic but remember to keep the emotional connection and trust.

“Logos, pathos, and ethos usually work together to win an argument, debates with argumentative seven-year-olds excepted.  By using your opponent’s logic and your audience’s emotion, you can win over your audience with greater ease.  You make them happy to let you control the argument.”

Dialogue vs. Debate vs. Discuss (and Why Focus on Dialogue)
Next Post:How To Change Your Life with the Law of Reciprocation