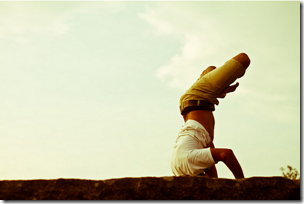 When you show up each day, at whatever you do, are you fully engaged?

Do you really apply yourself and test what you’re capable of?

Do you use it as a chance to get a little better, or learn a little more?

A Little Better, Adds Up to a Lot

When you focus on getting a little better, you get a lot better over time.  And you can build your experience and expertise, on a daily basis, a moment at a time, a chance at a time, and a choice at a time.  That is, if you’re present, prepared, and engaged.  That’s why “the present” is a gift to you, if you use it.

It’s your chance to both realize and unleash your potential.

In the book, Mindset: The New Psychology of Success, Carol Sweck shares wisdom on how you can express and grow your greatness by changing your mindset and applying yourself each day.

Realizing Your Potential the Wooden Way

His team didn’t start this way.  In fact, when he first became coach, his team was picked last to finish for the division.  That’s right … Last.   That does not sound like a winning team.

Yet his team proved them wrong, and they went on to win the division with 22 wins and 7 losses that season.  Talk about a turnaround.

How did he do it?

He focused on continuous improvement, conditioning, and mindset.

Become a Little Better Each Day

The key to getting a lot better, is to get a little better each day.

“Wooden is not complicated.  He’s wise and interesting, but not complicated.  He’s just a straight-ahead growth mindset guy who lives by this rule: ‘You have to apply yourself each day to becoming a little better.  By applying yourself to the task of becoming a little better each and every day over a period of time, you will become a lot better.’”

It’s not about perfection.  It’s about preparation.  And you get out what you put in.

“He didn’t ask for mistake-free games.  He didn’t demand that his players never lose.  He asked for full preparation and full effort from them.  ‘Did I win? Did I lose? Those are the wrong questions.  The correct question is: Did I make my best effort?’  If so, he says, ‘You may be outsourced, but you will never lose.’”

They Lost the Opportunity to Become Better

If you just go through the motions, you’re throwing away your chances.  It’s lost opportunity.

“He was not a softy.  He did not tolerate coasting.  If the players were coasting during practice, he turned out the lights and left: ‘ Gentlemen, practice is over.’  They had lost their opportunity to become better that day.”

Otherwise, the opportunities you lose, will be your own.