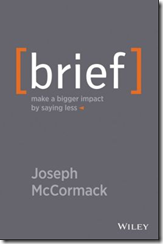 “Brevity is the soul of wit.” — William Shakespeare, Hamlet

It’s a brilliant book on the art and science of brevity.

The point is this:

If you can’t capture people’s attention and deliver your message with brevity, you’ll lose them.

With that in mind, I’m going to share 10 big ideas from the book that I think will help you cut the fluff, make your point, and share your ideas in a stickier way.

Verbosity can weight you down and hold you back.  If you want to succeed in today’s information overloaded world, learn to be a lean communicator.

“When you want to get more, decide to say less.  Those who want to succeed — even thrive — in an attention-deficit economy are masters of lean communication.  They stand out, their ideas are seen and heard, and their companies succeed.  Decide that being brief is your non-negotiable standard.”

2. What We Learned in School is All Wrong

“According to Adam Brown, corporate social media pioneer, our education is somewhat at fault for our verbosity.  The classic educational approach is to have students write to achieve a minimum word limit, for instance, an 800-word essay.  To win mindshare in social media, however, is to do the exact opposite.  Brown says, ‘It’s fundamentally against the way we have been trains to write.  But nowadays to succeed means to condense.  Most people consume social media on their mobile devices.  I call it the brand in hand.  It’s very likely the person is on the move — on the subway, waiting to pick up their kids.  The bottom line is: they’re doing something else.  So you’ve got to get those nuggets of wisdom, or conversation, or storytelling briefer and more succinct.’”

3. Embrace a New Form of ADD (Awareness, Discipline, and Decisiveness)

Use ADD to your advantage.  But first redefine it.

Cut the fluff and embrace the whitespace.  Trim what’s unnecessary, to leave what’s consumable and concise.

You can master brevity by learning how to organize your mind, and learning techniques to tell, talk, and show your ideas with clarity and precision.

6. Use BRIEF Maps to Deliver Brevity

Every BRIEF Map is organized in the following way:

B: Background or beginning

I: Information for inclusion

F: Follow-up or questions you expect to be asked or that you might ask

7. Use Narrative Maps to Break Through the Blah, Blah, Blah

Narrative Maps help you map out your message in a logical and repeatable way that gets to the essentials fast, and helps you eliminate distractions and clutter.

“Narrative Maps consist of several elements that make it easier to explain messages and give them clarity and context.  They have a clockwise build, you start with the center bubble, and add bubbles around it clockwise:

8. Give an Intriguing Single Story the TED Talk Way

We can take a page out of the TED Talk playbook to create simpler and more compelling stories.

“Emily McManus, editor of TED’s website says, ‘By 5 minutes in, you need to get into the middle arc of your story.  The best thing you can do if you’re trying to compress is not try to tell the entire story of your entire field in 15 minutes.  Rather, you want to give an intriguing single story.  The best speakers are the ones whose story has a beginning, a middle, and an end, but starts in the middle.  People who talk about very specialized subjects need the ability to give an overview of a field in a few minutes.  They lay out some of the hard problems and then focus on one specific aspect of that problem.’”

Don’t fall into the trap of going into “presentation” mode or “writing mode.”  Talk to people like a human being, and use simple language, as if you were explaining to a friend.

“David Meerman Scott says, ‘Some organizations muck up their communications with words that vaguely sounds impressive and important.  But at a company like HubSpot, all of the marketing people are required to constantly be in the marketplace, talking to people, whether it’s on the phone or electronically and through social networks.  So they’re not guessing the language that the market uses.  They’re communicating like human beings — because when human beings have a conversation, they don’t use that impressive, overused language.’”

Just because heads are nodding, that doesn’t mean ideas are sticking.  Check to be sure.

Pausing to check in with your audience gets you to stop talking and lets you know if people are paying attention and tracking what you are saying.

Brief: Make a Bigger Impact by Saying Less is a playbook and a reference guide for learning how to cut the fluff, expand the whitespace, and connect with people in a clear and concise way.

The book covers far more than what I covered here, but if you apply these 10 big ideas to your work and life, I hope you can free up some time, and free up some space, and practice your Lean Communication skills.

The Power of 3 for Effective Communication

The Power of Three for Effective Communication
Next Post:Don’t Lose Your Opportunity to Become Better