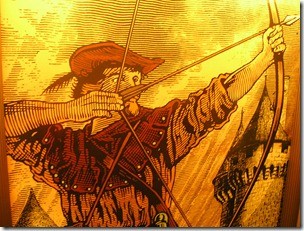 I watched the movie Robin Hood last week.  There’s nothing like watching the birth of a legendary archer to get me reflecting on my old archery skills.  Robin Hood and his band of merry men always entertain me.

When I was a kid I thought it was actually “Robbing” Hood because he was known for robbing from the rich and giving to the poor.  There’s more to the story though than just a bandit with a big heart.  It’s a story of adventure, daring, and courage.  It’s the story of a highly skilled archer who rises from commoner to hero.  In the movie, as the story goes, Robin Longstride (Robin Hood) promises a dying knight that he’ll return his sword to his father, Walter in Nottingham.  When Robin returns the sword, Walter convinces him to impersonate his dead son, to protect their land from confiscation.  Robin ends up quite the rebel rouser and proves himself a highly capable leader, even beyond his band of merry men, when he inspires everybody to fight for their home and land and protect from the French invasion.

Here are my three take aways:

If I were to add another take away, I would say it pays to be skilled.  Shooting arrows with precision through obstacles and over a distance, makes for some memorable movie scenes.

Photo by Will Hale.

Great Lessons Learned from John Maxwell
Next Post: How To Hold People Accountable with 10 Proven Practices