How Realizing Your Potential Depends on Your Beliefs 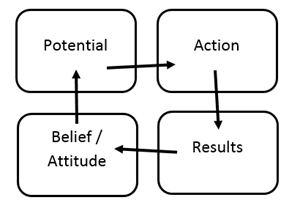 It’s important to know how your beliefs can enable or limit you.

Your potential is not a static thing.  It’s a dynamic process:

And your results shape your beliefs.

This process of realizing your potential works both ways:  Your beliefs can create upward momentum or they can create a downward spiral.

In the book, Unlimited Power: The New Science of Personal Achievement, Tony Robbins shares a model for realizing your potential and unleashing limitless results.

Don’t let beliefs stick to you like flypaper.  Be choosy and be a smart filter when it comes to your beliefs.

“Where do your beliefs come from?  Do they come from the average man on the street?   Do they come from TV and radio?  Do they come from whoever talks the longest and the loudest?  If you want to succeed, it would be wise for you to choose your beliefs carefully, rather than walking around like a piece of flypaper, picking up whichever belief sticks.  An important thing to realize is that the potentials we tap, the results we get, are all part of a dynamic process that begins with belief.”

Expectations of Failure Leads to Failure

”Let’s say a person has a belief that he’s ineffective at something.  Let’s say he’s told himself that he’s a bad student.  If has expectations of failure, how much of his potential is he going to tap? Not very much.  He’s already told himself that he doesn’t know.  He’s already signaled his brain to expect failure.  Having begun with those sorts of expectations, what sorts of actions will he probably take?  Will they be confident, energized, congruent, and assertive?  Will they reflect his real potential?  Not likely.  If you’re convinced you’re going to fail, why make the effort to try hard?  So you’ve started with a belief system that stresses what you can’t do, a system that subsequently signals your nervous system to respond in a certain way.  You’ve tapped a limited amount of your potential.    You’ve taken half-hearted , tentative actions.  What sort of results come out of all this?  Chances are they’ll be pretty dismal.   What will these dismal results do to your beliefs about subsequent endeavors?  Chances are they’ll reinforce the negative beliefs that started the whole chain.“

The Downward Spiral of Limiting Beliefs

”What we have here is a classic downward spiral.  Failure breeds failure.  People who are unhappy and who live ‘broken lives’ have often been without the results they desire for so long that they no longer believe they can produce the results they want.  They do little or nothing to tap their potential and begin to try to find out how they can get their life to where they’re doing as little as possible.   From such actions, what results do they achieve?  Of course, they are miserable results that break down their beliefs even more, if that’s possible.”

The Power of Great Expectations of Success

If you think you can, you can.  It’s your belief that puts the wheels in motion and generates your momentum.  And success breeds success.

”Let’s look at this from another direction.  Let’s say you begin with great expectations.  More than expectations—you believe with every fiber of your being that you will succeed.  Starting with that direct, clear communication of what you know to be true, how much of your potential will you use?  Probably a good deal.  What kind of actions are you going to take this time?  Are you going to drag yourself out and take a halfhearted shot at it?  Of course not!  You’re excited, you’re energized, you have great expectations of success, you’re going to go great guns.  If you put out that sort of effort, what sort of results will be generated?  Chances are they’ll be pretty good.  And what does that do to your belief in your ability to produce great results in the future?  It’s the opposite of the vicious cycle.  In this case, success feeds on success and generates more success, and eac success creates more belief and momentum to succeed on an even higher scale.”

Resourceful People Screw Up, but they Bounce Back

Will things go wrong? Will there be setbacks? Of course.   But with the right attitudes and beliefs, you can bounce back faster, course correct, and find your mojo again.

”Do resourceful people screw up?  Sure they do.  Do affirmative beliefs guarantee results every time? Of course not.  If anyone tells you he’s got a magic formula to guarantee perpetual, flawless success, you’d best grab your wallet and start walking in the opposite direction.  But history has shown time and again that if people maintain the belief systems that empower them, they’ll keep coming back with enough action and enough resourcefulness to succeed eventually.”

Sometimes Just Not Having a Limiting Belief is Enough

Sometimes, the simplest way to succeed is ignorance.   Many a nut has been cracked, simply because somebody didn’t know that it was impossible.

“Sometimes it’s not necessary to have a tremendous belief or attitude about something in order to succeed.  Sometimes people produce outstanding results simply because they don’t know something is difficult or impossible.  Sometimes just not having a limiting belief is enough.”

Your beliefs can help enable and empower you to realize your potential.

Or, limiting beliefs can limit your potential..

Fourth Generation Time Management: Relationships and Results
Next Post:Management Innovation is at the Top of the Innovation Stack