The Power of Starting Something Stupid Book Summary 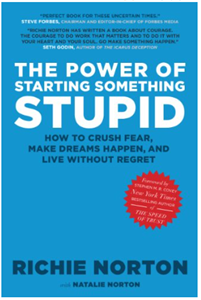 I have to admit, when I first saw the title of the book, The Power of Something Stupid, I thought it was dumb.

But, no, it’s actually brilliant.

Now I get it.  Stupid is the new smart.

The subtitle says it all:

How To Crush Fear, Make Dreams Happen, and Live without Regret

Early Nightingale used to say that, “Everything begins with an idea.”

Here’s the challenge: great ideas seem stupid at first.  Even Albert Einstein said, “If at first, the idea is not absurd, then there is no hope for it.”

Add to that, Oscar Wild said, “An idea that is not dangerous is unworthy of being called an idea at all.”

So how do you actually sort through stupid ideas, pick something that’s worth it, and go for it?

In The Power of Starting Something Stupid: Make Dreams Happen, and Live without Regret, Richie Norton, shows you how to push past fear, get over analysis paralysis, and do what you were born to do.

It’s a book about bringing your “crazy” ideas to life, and getting over the hump, the inertia, and the stigma of “stupid” ideas.

After I read The Power of Starting Something Stupid, it was easy to see why Stephen Covey said he “loved”  the book, and why Seth Godin said, “Richie Norton has written a book about courage.  The courage to do work that matters and to do it with your heart and soul.  Go make something happen.”

In a nutshell, it’s a book about experimenting, learning, living, letting go, and moving on.

Let me take you on a guided tour of the book, so you can see what it’s all about.

Chapters at a Glance

What’s In It For You?

Here is a sampling of some of the challenges that The Power of Starting Something Stupid helps you with:

Here are some of the key features of The Power of Starting Something Stupid:

Stephen Covey on The Power of Starting Something Stupid

The book wowed Stephen Covey.  In the foreword of the book, Covey wrote:

“I absolutely love this book.  I love how it makes me feel.  It energizes me, inspires me, and gives me confidence.  It reminds each of us that all things are possible, that life is short, and to take action now.

Simultaneously, Richie Norton rightly cautions us that our actions must be tempered by our integrity to our values and that in order to harness the full power of our personal authenticity we must first check our motives.

He teaches that our motives should be driven by our intent to benefit others.”

In The Power of Starting Something Stupid, Richie Norton shares a simple, but powerful framework for accelerating your success:

Stupid is the New Smart

One of the big ideas in The Power of Starting Something Stupid is to embrace the idea that stupid is the new smart.  According to Norton, “Stupid as the New Smart infers that while an idea may appear to be inherently faulty, the idea is, in reality, sound and in your best interest to pursuit.”

Norton shares ways to think about how stupid is a new way to be smart:

Don’t wait to start living your life.  Live with a sense of urgency, and embrace the idea that time is limited.

“The months passed but I couldn’t forget this question: ‘So, what have you learned/’  That question changed my life.  Here were the facts: my brother-in-law was gone, our son was gone, and there wasn’t a thing in the world I could do to change any of that.  Suddenly, my life took on a very real sense of urgency.  There was, in fact, a time limit!

There will always be a million reasons to wait until later.  This is simply the nature of the animal called life.

Those Gavins taught me to live, today.

I’ve summed up the lessons Iearned from the death of my brother-in-law and my son into what I call Gavin’s Law:  Live to start.  Start to live.”

Which idea do you start with when you have so many ideas?   It’s easy to fall into the trap of worrying about which idea is absolutely the next best thing, and find yourself in analysis paralysis.

Norton provides a way to cut through this and prioritize what to act on.  It’s the Stupid Equation, based on the Jeff Bezos Test:  “Will I regret it when I’m 80?”

“Here’s the deal: If you’re scared of choosing the wrong idea to start, you’re going to keep yourself from starting altogether.

And on the flip side, if you try to start all of your stupid ideas at once, you’re bound to waste time, energy, and money (and go completely loco in the process).

Plus, no matter how hard you focus, if you’re laser-focused n the wrong activity or activities, your laser is going to end up burning a hole right through your potential for success.”

Norton puts it in very clear terms, that “successful people don’t use the obstacles of time, education, and money as excuses, and neither should you.”

“Something in your life is taking precedence over those ideas, making it “stupid” for you to concentrate on them right now.  The three most common excuses I hear in my consulting practice for postponing the initiation of stupid ideas are:

The Art of Resourcefulness

Constraints are a good thing.   They teach you to learn how to be resourceful.

“Truthfully, if you think you don’t have enough money to get started on your project, it can actually be quite a blessing!  If you do start now, despite the lack of monetary abundance, necessity will dictate that you learn the art of resourcefulness in the form of bootstrapping.  This process will require you to become intimately acquainted with the value of networking (learning to authentically connect with and effectively influence others).

You’ll also learn the value of partnering with others to get where you need to be (the concept of 1+1=3).  Never underestimate the long-term value (or the power) of developing the art of resourcefulness.”

The Stupid Loop goes from stupid, to smart, to standard, and then repeats the cycle.  It’s actually a formula for innovation.

“Stupid goes in a loop.  It’s cyclical.  Like Ford and his model T., if your stupid project becomes successful, it will likely become accepted, then considered smart, and eventually normal.  Whoops.  Normal is where innovation goes to die.  Normal isn’t new.  People like ‘normal,’ but they love ‘new.’

According to the Stupid Loop, a successful stupid project will become smart and even accepted and celebrated by the masses (or the niches.)  However, once stupid normalizes, you have to ask yourself, ‘Do I stay the same, for better for worse, or do I innovate – return to stupid – for better for worse?’  Understanding the stupid loop, and why innovation is so vitally important, helps you develop the ability to check the pulse of the environment around you and adapt accordingly.”

“Over a three-year period, I consulted the revenue-generating arm of a nonprofit organization.  This organization had been running in the red, and I was hired to help the group generate profits so that they could become self-sustaining.  I decided to experiment with personal projects that met the mission of the organization to see what would happen.  Individuals created projects they were interested in, set deadlines to being and end, started small, and built simple, incremental successes.

I observed a significant shift in overall profitability when employees were given projects in which they felt a sense of ownership and autonomy.  Not only did department profitability increase, but also employees were suddenly engaged and enthusiastic about their work.  Creativity increased as a result, and the entire department culture shifted.  It is ironic to note that before personal projects were introduced, the group had been  working in silos, with nearly no employee integration.  As a natural by-product of the newly introduced personal products, employees were suddenly invigorated and eager not only to complete their own tasks, but also to collaborate and help each other’s projects succeed as well.”

The Power of Starting Something Stupid: Make Dreams Happen, and Live without Regret, by Richie Norton is available on Amazon:

The Power of Starting Something Stupid: Make Dreams Happen, and Live without Regret, by Richie Norton

How To Build Your Creative Confidence

Why It’s Great to Be Able to Make Mistakes

210,000 Unique Visitors Per Month
Next Post:Tony Robbins on the Fastest Ways to Get Over Your Fears