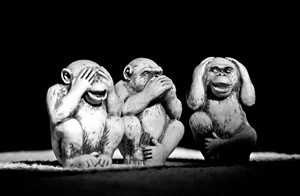 Here’s a bit of insight you can see in action every day.

Do you ever feel the need to yawn, when somebody else yawns?

Do you ever know exactly what somebody is going to say next?

How about the situation where the the word is on the tip of your tongue, but neither of you can remember what it is, yet you both know exactly what you mean?

How do we explain this monkey see, monkey do behavior and being on the same wave length?

They are basically complex cells that can mirror other people’s intentions or  feelings.

In the original study, a monkey watched a researcher eat an ice cream cone.  The monkey fired the mirror neurons that simulated eating simply by watching the researcher.  Since that original study, there have been various studies that show the impact of mirror cells to explain anything from empathy to imitation.

In fact, mirror neurons are significant enough to reshape our thinking of culture, philosophy, language, autisim and psychotherapy.

In the article, Cells That Read Minds, Sandra Blakeslee writes about mirror neurons.

You Can Sense Intentions

“The human brain has multiple mirror neuron systems that specialize in carrying out and understanding not just the actions of others but their intentions, the social meaning of their behavior and their emotions.

Mirror help us understand the social meaning behind actions.”

“Everyday experiences are also being viewed in a new light. Mirror neurons reveal how children learn, why people respond to certain types of sports, dance, music and art, why watching media violence may be harmful and why many men like pornography.”

What Else Can Mirror Cells Help Explain?

The next time you go to yawn, take a look around to see if you’re mirroring somebody.

Or, after you yawn, see if somebody else mirrors you.

Motivation and Technique
Next Post:Sources of Insight is One Year Old