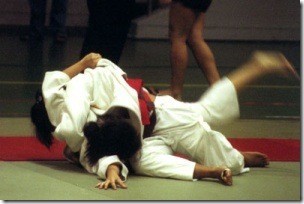 “I don’t mind arguing with myself. It’s when I lose that it bothers me.” – Richard Powers

How do you use your opponent’s argument to your own advantage?  You use concession.

My dictionary says that concession is “admitting of a point claimed in argument.”

Concession is a way for you to give a little to get a lot.

Find a Way to Agree

One way to think of it is finding a way to agree.   You can then use the agreement as a bridge to make your point.  This works because you are letting your opponent score points.

Most importantly, it indicates that you’re listening.  You validate them.

In Thank You for Arguing: What Aristotle, Lincoln, and Homer Simpson Can Teach Us About the Art of Persuasion, Jay Heinrichs writes about using concession as rhetorical judo.

Use Your Opponent’s Argument to Your Own Advantage

“First, though, let’s master the most powerful logos tool of all, concession.  It seems more Jedi knight than Rambo, involving more self-mastery than brute force, but it lies closer to the power center of logos than rhetoric’s more grandiloquent methods.

Even the most aggressive maneuvers allow room for the opponent’s ideas and the audience’s preconceptions.

To persuade people – to make them desire your choice and commit to the action you want – you need all the assets in the room, and one of the best resources comes straight from your opponent’s mouth.”

There is a flip side to every argument.  Use that flip side, as a concession, to win points, and move forward.

“Aristotle said that every point has its flip side.  That’s the trick to concession.  When a spouse says, ‘We hardly ever go out anymore,’ the wise mate does not spew examples of recent dates; he says, ‘That’s because I want you all to myself.’

This response will at least buy him time to think up a credible change in tense: ‘But as a matter of fact, I was going to ask if you wanted to go to that new Korean restaurant.’

Concession is rhetorical judo because you are using your opponent’s moves to help you support your argument.  Obviously, you want to choose which points to concede to carefully.

Practice is how you learn, and the simplest way to practice is to start finding ways to agree.