Do Conflict and Debate Enhance Creativity? 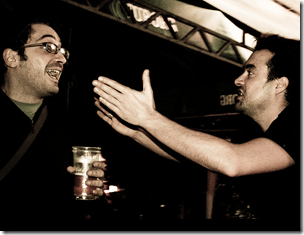 What if conflict and debate help ideas to be all that they can be?  If that’s so, should you defer criticism or debate as you go?

Well, there is a growing body of evidence that says conflict enhances creativity.

Here’s the surprise:  there’s evidence that it’s better to debate as you go versus saving debates for later.  Does that mean we need to do a re-think about Edward de Bono’s Six Thinking Hats, or Disney’s Brainstorming Method where he factored out the Dreamer from the Realist and the Critic?

One thing is for sure though, the key is to fight over ideas, not personalities and egos.

In the book, The Myths of Creativity:  The Truth About How Innovative Companies and People Generate Great Ideas, David Burkus shares key insight into how conflict and debate enhance our creative process and help us produce better ideas.

In the presence of criticism and conflict, we self-monitor and shut down our creative ability.

“Others believe that creative ideas develop deep inside the human brain, claiming that as we get older and more ‘sophisticated,’ our more advanced thought processes self-monitor our creative ideas and eliminate them in the presence of criticism and conflict.  This theory appears to explain why children, uninhibited by self-monitoring, appear to be inherently creative, yet as they grow older and their actions are evaluated, most them lose interest in creative pursuits.”

A Growing Body of Research Begs to Differ

There’s growing evidence that says the opposite:  Conflict and confrontation drive us to more creative output.

“Logically then, if we want to recapture our creative thought process, we need to build an environment that emphasis harmony, suspends judgment, and prevents conflict, the assumption being that such an environment would allow individuals to ease their self-monitoring and tap their childhood creative process.  However, a growing body of research supports the opposite conclusion.  It could be that the conflict, evaluation, and confrontation brought about by expressing and debating differing viewpoints drive teams to an overall more creative output.”

When in doubt, test it out.

“Perhaps the most famous study in support of the idea that conflict enhances creativity is an experiment that was led by Charlan Nemeth, a professor of psychology at the University of California, Berkeley.  Nemeth and her team wanted to explore the role of conflict in generating and producing creative ideas.  They assembled participants into three separate experimental conditions (minimal, brainstorming, and debate) and formed them into teams within those conditions.  Each team was tasked with generating ideas for the same challenge: how to reduce traffic congestion in the San Francisco Bay Area.”

The Minimal Team, the Brainstorm Team, and the Debate Team

Should you defer criticism or debate as you go?  The Minimal team, the Brainstorm team, and the Debate team were put to the test.

“The ‘minimal’ teams were given no further instructions and told to develop as many ideas as possible.  The ‘brainstorming’ teams were given the traditional set of brainstorming rules: generate as many ideas as possible, defer judgment on all ideas, generate wild ideas, and build upon each other’s ideas.  Paramount among those rules was the notion that all judgment should be suspended and no idea criticized or debated.  The ‘debate’ teams were given a set of rules similar to the brainstorming teams but with one important difference.  Instead of deferring judgment, they were told to debate and criticize other’s ideas as they were generated.”

The Debate Team Outperformed by 25%

“When the results were calculated, the winners were clear.  Although teams in the brainstorming condition did generate more ideas than the teams given minimal instructions, it was the teams in the debate condition that outperformed the rest, producing an average of 25% more ideas than the other two conditions in the same period of time.  Even after the team had disbanded, the influence of debate on the generation of ideas continued.  In follow-up interviews with each subject, researchers asked the participants if they had any more ideas for solving the traffic problem.  Each participant from the minimal and brainstorming conditions did have one or two more ideas, but participants in the debate conditions gave an average of seven additional ideas per person.”

Teams that Utilize Conflict Outperform Teams that Focus on Cohesion

It works in Paris, too.  Apparently, the conventional wisdom of suppressing debate just might be wrong.

“Nemeth and her team considered that the study might have been a fluke or even a decidedly American phenomenon.  To rule out these possibilities, they reran the experiment in Paris using the exact same methods and instructions, except that teams were asked to resolve the traffic problem for Paris, not San Francisco.  The results were the same.  Teams that utilized conflict in their process consistently outperformed teams that focused on cohesion.  In a summary of the study’s results, Nemeth challenges the conventional wisdom of suppressing debate: ‘Our findings show it it does not inhibit ideas but, rather, stimulates them relative to every other condition.’”

Individuals Can Use Conflict to Create a Better End Product

It works for individuals, too.  Conflict and debate can help individuals learn how to weave together collective perspectives, and to build a better end product.

“In the end, the students who were instructed to fight over their ideas produced a report with more in-depth research and a more logical presentation of the rationale behind their own ideas.  They also displayed a greater ability to weave the ideas of many students together so that the end result was stronger and more comprehensive, showing that even at an early age, individuals are able to learn how to use constructive conflict when working together and allow that conflict to create a better end product.”

“The power of debate for improving the end result is something Alfred Sloan discovered on his own.  The long-time chairman and CEO of General Motors once interjected during an important meeting by asking, ‘Gentlemen, I take it we are all in complete agreement on the decision here?  Sloan then waited as each member of the assembled committee nodded in agreement.  Sloan continued, ‘Then, I propose we postpone further discussion of this matter until our next meeting to give ourselves time to develop disagreement and perhaps gain some understanding of what this decision is about.’”

5 Conflict Management Styles at a Glance

Fight Over Ideas Not Egos

Fight Over Ideas Not Egos
Next Post:How Lucky, Gifted, and Focused Helps Us Achieve Higher Levels of Performance