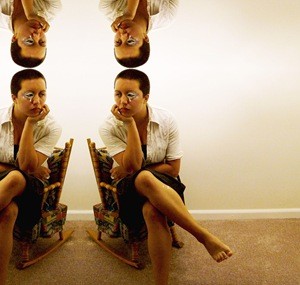 It explains why some people are happy in the abstract, while others are uncomfortable until it’s concrete.  It explains analysis paralysis.  I thought of the people I know that are happier to share castles in the mind, or explain or think through a problem than act on it (describing over doing.)

In the book, Tactics: The Art and Science of Success

, by Edward de Bono explains the notion of describers and doers.

‘The natural thinkers tends to strive for perfection, whereas the natural doers act quickly, relying on intuition, and they’re the ones that get the most done.’

Thought is Not the Enemy of Action
Just because you’re doing, doesn’t mean you aren’t thinking.  de Bono writes:

It is suggested that some people are oriented toward description, analysis, and thinking, whereas others are oriented toward action.  I strongly disagree with this distinction between thinking and doing: that thought is the enemy of action.  I have, in fact, invented a word to cover the thinking involved in getting things done: the word is ‘operacy.’

Take a decision.  Take action.  Bring thinking to bear only to modify and adjust and make your decision work.  The suggestion here is that everything cannot be thought out in advance, but that there is a continuous synergy between though and action.  The suggestion is that you cannot smell a flower at a distance – you have to get up close to it.

Thinking is Used by Describers and Doers
Describers and doers both use thinking, but doers are using action to get feedback and test drive their results.  de Bono writes:

… I agree that that too much thinking along old lines will not lead to innovation.  I am also inclined to agree that there are ‘describers’ and ‘doers.’  It is my experience, however, that thinking is used by both groups.  I feel it is very dangerous to pretend that doers do not use and have no need for thinking.

de Bono makes his point sharply by saying how scientists and engineers had proven that man-powered flight was impossible because a human couldn’t generate enough horsepower to raise a plane off the ground.  Then Paul MacCready did it successfully because he didn’t know it was impossible.

While I think what the mind can concieve, the body can achieve, I also think that results continuously inform the mind of what’s possible.  When I see somebody stuck because they didn’t just try something, I simply laugh to myself, “ah, describer.”

My 10 Best Lessons I Learned in Life for Success
Next Post: Sleep Patterns: Are You a Lark, Owl, or Hummingbird?