How To Make Better Decisions Through Disagreement 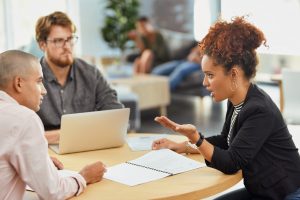 Do you know how to make better decisions?

To make better decisions, develop disagreement rather than consensus.

Disagreement provides alternatives and makes you think more deeply about the issue.

In fact, if you don’t have disagreement, you’re not ready to make a decision.

In The Essential Drucker, Peter Drucker writes about encouraging disagreement rather than consensus to helps make better decisions.

According to Peter Drucker, you should not make a decision unless you’ve considered alternatives.

“Unless one has considered alternatives, one has a closed mind.  This above all, explains why effective decision-makers deliberately disregard the second major command of the textbooks on decision-making and create dissension and disagreement, rather than consensus.

Decisions of the kind the executive has to make are not made well by acclamation.  They are made well only if based on the clash of conflicting views, the dialogue between different points of view, the choice between different judgments.  The first rule in decision-making is that one does not make a decision unless there is disagreement.”

If you don’t have disagreement, then you’re not ready for a decision.

You don’t fully understand the problem.

“Alfred P. Sloan is reported to have said at a meeting of one of his top committees, ‘Gentlemen, I take it we are all in complete agreement on the decision here.’

Everyone around the table nodded assent.

‘Then, continued Mr. Sloan, ‘I propose we postpone further discussion of this matter until our next meeting to give ourselves time to develop disagreement and perhaps gain some understanding of what the decision is all about.’

Sloan was anything but an “intuitive” decision-maker.  He always emphasized the need to test opinions against facts and the need to make absolutely sure that one did not start out with the conclusion and then look for the facts that would support it.  But he knew that the right decision demands adequate disagreements.’

3 Reasons for Insisting on Disagreement

“There are three main reasons for the insistence on disagreement.  It is, first, the only safeguard against the decision-maker’s becoming the prisoner of the organization.  Everybody always wants something from the decision-maker.

Everybody is a special pleader, trying – often in perfectly good faith – to obtain the decision he favors.

This is true whether the decision-maker is the president of the United States or the most junior engineer working on a design modification.  The only way to break out of the prison of special pleading and preconceived notions is to make sure of argued, documented, thought-through disagreements.

Second, disagreement alone can provide alternatives to a decision.  And a decision without an alternative is a desperate gambler’s throw, no matter how carefully thought through it might be.

There is always a high possibility that the decision will prove wrong – either because it was wrong to begin with or because a change in circumstances makes it wrong.  If one has thought through alternatives during the decision-making process, one has something to fall back on, something that has already been thought through, that has been studied.

Without such an alternative, one is likely to flounder dismally when reality proves a decision to be inoperative.

Above all, disagreement is needed to stimulate the imagination.  One does not, to be sure, need imagination to find the right solution to a problem.  But then this is of value only in mathematics.  In all matters of true uncertainty such as the executive deals with, whether his sphere is political, economic, social, or military – one needs “creative” solutions that create a new situation.

And this means that one needs imagination – a new and different way of perceiving and understanding.”

To Make Better Decisions, Commit to Find Out Why People Disagree

Don’t just disagree, find out why there’s disagreement.  Knowing why people disagree helps you cut through the fog.  Drucker writes:

“The effective decision-maker, therefore, organizes disagreement.  This protects him against being taken in by the plausible but false or incomplete. It gives him the alternatives so that he can choose and make a decision, but also so that he is not lost in the fog when his decision proves deficient or wrong in execution.

And it forces the imagination – his own and that of his associates.  Disagreement converts the plausible into the right and the right into the good decision.

He starts out with the commitment to find out why people disagree.”

Drucker writes that you need to understand the alternatives:

“Effective people know, of course, that there are fools around and that there are mischief-makers.  But they do no assume that the man who disagrees with what they themselves see as clear and obvious is, therefore, either a fool or a knave.  They know that unless prove otherwise, the dissenter has to be assumed to be reasonably intelligent and reasonably fair-minded.

Therefore, it has to be assumed that he has reaches his so obviously wrong conclusion because he sees a different reality and is concerned with a different problem.

The effective person, therefore, always asks, What does this fellow have to see if his position were, after all, tenable, rational, intelligent?

The effective person is concerned first with understanding.  Only then does he even think about who is right and who is wrong.”

According to Peter Drucker, to make the most effective decisions, you need to understand both sides of the issue:

“In a good law office, the beginner, fresh out of law school, is first assigned to drafting the strongest possible case for the other lawyer’s client.

This is not only the intelligent thing to do before one sits down to work out the case for one’s own client.  (One has to assume, after all, that the opposition’s lawyer knows his business, too.)  It is also the right training for a young lawyer.

It trains him not to start with, “I know why my case is right,” but with thinking through what it is that the other side must know, see, or take as probable to believe that it has a case at all.  It tells him to see the two cases as alternatives.

And only then is he likely to understand what his own case is all about.  Only then can he make out a strong case in court that his alternative is to be preferred over that of the other side.”

Great Quotes on Happiness to Brighten Your Day Today
Next Post:How To Test Your Decision-Making Process to Make Better Decisions