Do Customers Really Know What They Want? 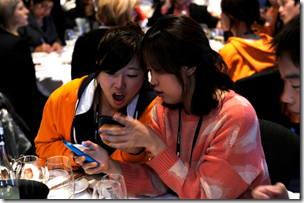 It’s tough to innovate when you don’t know what your customers want.

The challenge is, customers don’t usually know what they want until they see it.

But radical innovation is when you create something completely new, or solve a problem in a completely different way.  And this takes exploring the art of the possible, and not getting stuck in the trap of limiting experiences.

In the book, The Four Lenses of Innovation: A Power Tool for Creative Thinking, Rowan Gibson reminds us how listening to your customers is necessary but insufficient if you want to create disruptive or radical innovation.

People don’t always know what they want.  But they know it when they see it.   That’s what makes innovation so tough.

“However, innovating from the customer backward doesn’t just mean ‘listening to the voice of the customer.’  Of course it can be helpful to conduct market research, get customers to fill in a questionnaire, or run focus-group sessions.  But merely asking customers what they want or need doesn’t always yield the most inspiring or unique customer insights.  Why not? In an interview with Business Week in May 1998, Steve Jobs remarked: ‘It’s really hard to design products by focus groups.  A lot of times, people don’t know what they want until you show it to them.’”

We are Prisoners of Our Own Experience

If you want to innovate, you have to break out of the box.  The problem is that our experience puts us back in the box.

“As we learned earlier in this book, all of us have a set of established patterns in our minds that give us a preconceived and very narrow understanding about what a particular product or service is, what it is meant to do, how exactly it does it, what it is supposed to look like, where its limitations are, and so on.  Most people find it extremely difficult to see outside of these patterns and imagine how things could or should be different.  The great American journalist Edward R. Murrow once said, ‘Everyone is a prisoner of his own experience.’  Management consultant Mohanbir Sawhney echoes these words when he writes, ‘to gain customer insights, we must understand that we are prisoners of what we know and what we believe.’”

Do You Want a Faster Horse or Something Completely Different?

We don’t want faster horses.  We want something to solve our problem in a completely different way.

“We have probably all heard the famous quote attributed to Henry Ford: ‘If I had asked people what they wanted, they would have said faster horses.’  Actually, research reveals no evidence that Ford ever uttered or wrote these words, but although this adage may be apocryphal it nonetheless makes a good point., and if Ford had asked such a question he probably would have received a very similar answer.  That’s because people tend to respond this way when asked about what they want or what they need.  They can quite easily tell you why they like or don’t like some existing thing, but they can rarely imagine or articulate a radically different solution.  So customers usually say things like, ‘Make it faster,’ ‘Make it cheaper,’ or ‘Make it easier to buy or use,’ rather than, ‘What I want is something  that solves my problem in a completely different way.’”

We Know What We Want, When We See It

The problem is we don’t know what that completely different way is, until we see it.

“Nobody, for example, told Apple they wanted a translucent desktop computer, a cool MP3 player, an online music store, a revolutionary smart phone, an App Store, or a tablet computer, but once Steve Jobs showed us these amazing things we realized we definitely wanted them–and needed them.  Likewise, nobody was begging Google for a digital mapping service that would enable us to instantly find any spot on the planet, and then fly down to an address virtually and view it from the street. “

What do you want that doesn’t exist?  It’s hard to imagine.   But once it exists, it makes perfect sense.  And that’s the challenge of radical or disruptive innovation.

“Did you know you needed TiVo, Netflix, or YouTube? Do you remember wishing somebody would invent Amazon.com, eBay, or PayPal? Were you dying for a social media platform like Facebook or for Spotify’s streaming music service, , or for Pandora’s personalized Internet radio? When did you tell yourself you needed a mobile phone for connecting with taxis, private cars, and rideshare services like (Uber)? Or a home thermostat that learns your behaviors (Nest)? Or a cool set of DJ headphones for listening to your iPod (Beats by Dre)? All of these innovations were design to address needs that most of us are not even aware of, which is why we were not articulating them.  Or they gave us solutions we could never have imagined because we didn’t even know they were possible.”

If you want to improve something you’ve already got, ask people what they want.

If you want to change the game, don’t just ask people what they want–explore the art of the possible.

Innovate with your customers, but don’t wait for them to tell you what to do.

How Great Leaders Build a Culture of Innovation and Change

Innovate in Your Approach

Momentum is Key in Physics, Sports, and Sales!
Next Post:7 Habits of Highly Motivated People