Don’t Regret the Path Not Taken 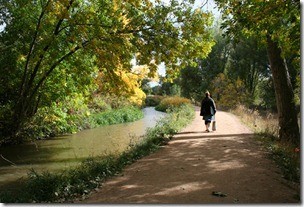 “Many of us crucify ourselves between two thieves – regret for the past and fear of the future.” – Fulton Oursler

It’s easy to second guess yourself, especially with 20/20 hind-sight.  It’s easy to ponder the “what if’’s” and “what could have been’s.”

It’s not so easy to let your regrets go.

You Could Have Been Hit By a Bus

I was having lunch with a friend when the topic of regret came up.  After my friend talked through his one regret in life, I mentioned that I had just read the perfect words on how to let go of regrets.

In essence, you could have taken your other path and been hit by a bus.

My take is, you never know how things will go.  Instead, you make the most of where you are now, and you carry the good forward — the rest is experience.  My friend instantly got it — it was an ah-ha moment for him, and he suggested I blog it to share more broadly.

The book that re-shaped my outlook on regret is, The Paradox of Choice: Why More Is Less, by Barry Schwartz.

Hit By a Bus

Schwartz writes that life is unpredictable and it doesn’t help to waste time on regret.

Via The Paradox of Choice:

“I have a friend, frustrated over his achievements in life, who has wasted countless hours over the past thirty years regretting that he passed up the chance to go to a certain Ivy League college.

‘Everything would have been so different,’ he often mutters, ‘if only I had gone.’  The simple fact is that might have gone way to the school of his dreams and been hit by a bus.”

Schwartz writes that letting go of regret is better than second-guessing a decision.

Via The Paradox of Choice:

“Changing the one decision — going to the more prestigious college — would not have altered his basic character or erased the other problems that he faced, so there really is nothing to say that his life or career would have turned out any better.

But one thing I do know is that his experience of them would be infinitely happier if he could let go of regret.”

I don’t know about you, but the “hit by a bus” really put things in perspective for me.

Previous Post:Spring Cleaning Sources of Insight
Next Post:Find Your Strengths Among Your Team