Fight Over Ideas Not Egos 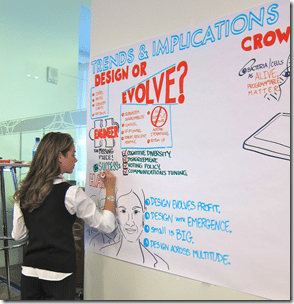 “Ideas stand in the corner and laugh while we fight over them.” ? Marty Rubin

One of the myths of creativity and innovation is that we need happy and cohesive teams to produce outstanding results.

If we learn how to fight properly, we can use conflict to enhance our creative potential, to generate consistently great ideas.

In one of the earlier teams I was on, we had a practice called “expose the thinking.”  The idea was to share early thinking, and critique the thinking, not the person.   This helped people learn to share more freely, and it helped shape better ideas, by getting a collective perspective.

On teams that don’t “expose the thinking” or avoid conflict, they miss out on truly exploring the merits, the possibilities, and the weaknesses of an idea.

The irony is that playing it safe, puts them at risk.

The key is to focus on intellectual conflict, not interpersonal conflict, and to move ideas forward by providing both criticisms and suggestions for improvement.

In the book, The Myths of Creativity:  The Truth About How Innovative Companies and People Generate Great Ideas, David Burkus shares key insight into how to enhance the creative process and produce better ideas.

“It’s easy to look at the output of a group like Pixar or Evernote and make assumptions about its creative process.  The Cohesive Myth leads us to the assumption that if we want to be as creative as  Pixar or make innovative products like Evernote, we need to build teams that are happy and playful all the time.  Although the folks at both companies certainly enjoy their work and their teams, they also understand that conflict, not cohesion, can drive their creative process.”

If you focus on “intellectual” or “task” conflict, and limit or avoid “interpersonal” or “emotional” conflict, you can produce better ideas.

“There are two types of conflict: ‘interpersonal’ or ’emotional’ conflict and ‘task’ or ‘intellectual’ conflict.  In interpersonal conflict, people don’t fight over the merits of the ideas, they fight over personal conflicts, power struggles, or even just a general dislike for each other.  Rather than pushing ideas to become better, these conflicts are often toxic and can be destructive to individuals and teams.  Task conflict, however, is notably more productive because it is limited to the facts and merits around an idea.  People fight over which ideas are best, based not on their personal opinions, but on the value of each suggestion.  Feelings are spared because the structure of the fight keeps it focused on producing a better end result, not just winning or losing.”

Evernote Was Born Out of Conflict

“Evernote began as two separate companies both looking to create a way for people to store information and recall it on demand, what is now referred to as a memory ‘extension.’  A serial entrepreneur, Phil Libin had assembled his original team under the company name Ribbon but almost immediately learned of another team of mostly Russian programmers who called their project Evernote.  The Russian coders had already made significant progress on Libin’s idea, so Libin proposed a merger.  Rather than fight each other in the industry, the two companies joined forces and fought each other inside the same walls.  ‘Evernote was created in this unusual way: two startups with similar visions but different personalities and backgrounds,’ Libin recalls.  ‘Immediately we had a conflict of ideas, but that’s what made it strong: Only the best ideas survive.’  The two teams kept their conflict focused on the overall mission of creating a product that simply and easily allows people to save notes and retrieve them from a variety of platforms like their phone, tablet, or computer.  Even today when conflict arises, it’s usually in the service of Evernote’s larger mission and not the smaller mission of individual interests.”

“In the 1970s at Xerox PARC, regularly scheduled arguments were routine.  The company that gave birth to the personal computer staged formal discussions designed to train their people on how to fight properly over ideas and not egos.  PARC held weekly meetings they called ‘Dealer’ (from a popular book of the time titled Beat the Dealer.)  Before each meeting, one person, known as ‘the dealer,’ was selected as the speaker.  The speaker would present his idea and then try to defend it against a room of engineers and scientists determined to prove him wrong.  Such debates helped improve products under development and sometimes resulted in wholly new ideas for future pursuit.  The facilitators of the Dealer meeting were careful to make sure that only intellectual criticism of the merit of an idea received attention and consideration.”

If you’re going to disagree, at least understand the other person’s point of view.  A simple test is whether you can articulate their position.

“Inside these debates, Taylor taught his people the difference between what he called Class 1 disagreement, in which neither party understood the other party’s true position, and Class 2 disagreements, in which each side could articulate the other’s stance.  Class 1 disagreements were always discouraged, but Class 2 disagreements were allowed, as they often resulted in a higher quality of ideas.  Taylor’s model removed the personal friction from debates and taught individuals to use conflict as a means to find common, often higher, ground.”

To move the ball forward, Pixar uses a practice where a critic points out a problem, and, a potential improvement.

“The teams at Pixar rely on their own method to keep their daily sessions focused on intellectual conflict and to avoid personal bickering.  They called that method ‘plussing.’  Whenever an idea is challenged or an animated frame criticized, that criticism must always contain a suggestion about how to improve the work — a plus.  … Without plussing, their morning crit sessions could get pretty negative and emotionally draining.”

How To Instantly Boost Your Creativity and Flow More Ideas

How To Build Your Creative Confidence

The Real Purpose of Philosophy
Next Post:Do Conflict and Debate Enhance Creativity?