Getting Ahead: Three Steps to Take Your Career to the Next Level Book Summary 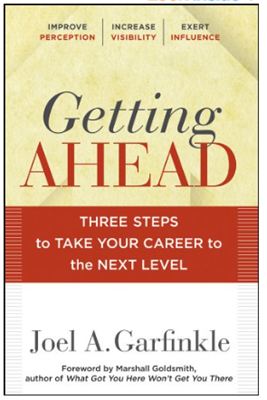 “There is no passion to be found in playing small—in settling for a life that is less than you are capable of living.” — Nelson Mandela

You can use perception, visibility, and influence to  to help you get ahead in your career, and get more out of the time you already put into work.

Does this sound like a familiar scenario?  Two employees put in the hours, execute excellent work and achieve results for their company.  But only one gets the promotion, while the other gets overlooked.

According to Garfinkle, the difference that makes one person more successful than another is leveraging and applying perception, visibility, and influence better than anyone else.   Rather than leave their careers to fate or chance, they proactively shape their career using these three critical skills.

Actionable Insight for Getting Ahead in Your Career

In the book, Getting Ahead: Three Steps to Take Your Career to the Next Level, Joel A. Garfinkle shares his PVI model – Perception, Visibility, and Influence.

If you have a job and work for a living, this book is a must read.  It’s well-researched, jam-packed with gems of insight, and extremely actionable.  Marshall Goldsmith, author of What Got You Here Won’t Get You There wrote the foreword, and endorses the book.

The author, Joel Garfinkle, is one of the top 50 executive coaches in the U.S.   He’s worked around the world with clients including Oracle, Google, Amazon, Deloitte, Ritz-Carlton, Bank of America, Starbucks, and more.  He’s regularly featured in the media, including ABC News, NPR, the New York Times, Forbes, the Wall Street Journal, and BusinessWeek.

Career Advice from a Results-Driven Coach

One thing I should point out about books I’ve seen written by effective coaches is that they tend to be more action-oriented.

What I like about this book is that it’s a hard-core guide to surviving and thriving at work.

Chapters at a Glance

What’s In It For You

Here is a sampling of some of the challenges that Getting Ahead helps you with:

Here are some of the key features of Getting Ahead:

What Makes One Person More Successful than Another?

The key point here is that no matter how overloaded they might be, successful people make the time to prioritize perception, visibility, and influence.  I think another bonus here is that reputation and rapport help reduce friction and amplify your results.  If you build the perception that you’re a team player and share credit, more people will help you succeed.

Get the Most from Your Time at Work

You spend a lot of time at work.  You should get the most from the time you already spend.

“You spend one-third of your life — more than 100,000 hours — at work.  To gain as much as possible from an endeavor to which you dedicate such a high percentage of your time, you must leverage PVI.”

I’m always looking for ways to get more out of the time I already spend.  I think that’s the key in life:  Find more ways to spend time doing what you love, and find ways to make the most of the time you already spend.   Given how much time we spend at work, I’m a fan of getting the most from it.

Throughout the book, Garfinkle provides a bunch of strategies and tactics you can add to your bag of tricks to amplify your impact at work, and to make the most of the time that you already spend.  One of my favorite points in the book is on giving and getting help.  I’ve found that asking the right people for help is a great way to get ahead, especially if you bring something to the table.   It’s like bartering with skills and building your network of capability.   I’ve also found that helping others is not only good Karma, but lifting others lifts you up.   It’s more than “what goes around comes around.”  It’s a way to build a healthy culture of collaboration versus a climate of competition, distrust, and fear.

From the “Merchant of Death” to the Nobel Prize

Garfinkle tells us a story how a newspaper mistakenly wrote about Alfred Nobel in the obituary.  It was supposed to be about this brother who had died.  The headline read, “The merchant of death is dead.”  As the inventor of dynamite, it was easy to see that perception.  But Nobel wanted to be remembered in a positive light, so he used his fortune to establish awards for great achievements in humanity … and the Nobel Prize was born.

Garfinkle mapped out the Seven Influencers on Perception based on 15 years of research working with and interviewing coaching clients around the world.  Here’s what

For each of these elements, Garfinkle provides “examples”, “impact”, and most importantly, “what can you do.”  For example, in terms of  Friends at Work, Garfinkle says choose two influential people at work that you want to spend more time with, so you can learn and model from them.

Make Your Work Your Signature

What’s the mark you want to leave?

“Ask yourself the same question: ‘What do I have that my successful colleagues don’t have?’ Visibility does not just mean that you have to be physically visible.  It also means that your work has to be so unique and outside-of-the-box that it becomes your signature.”

Unique and outside-of-the-Box.   Well put.   Already I’m taking another look on how to leave my mark.  Zorro left a “Z.”  I want to sign mine with results that matter.

If You are Not Visible, You are Invisible

There is no in-between.

“You may have received past promotions based solely on merit and hard work.  Your career may for a time move ahead nicely until suddenly — bam — it comes to a standstill.  Talent and ability only take you so far.  Be warned: If you don’t proactively leverage and utilize visibility, your career will stagnate.”

Garfinkle is spot on here.  How many times have I heard, “You’re doing the work.  You need visibility?”  Too many.  It was actually great feedback.  I was never a fan of showing off my work, and I believed that “good work sells itself.”  Unfortunately, that’s not true.  While I did luck out with some great managers who were great advocates, I learned in the end that you need to own marketing your work.  Marketing your work makes it easier for others to market it for you.  After all, if you can’t market your work, you put a burden on others to figure out what it’s all about.  The more friction-free you make it, the more it will spread.  I’ve found the key here is to practice telling and selling your story, and finding fast ways to demo in a way that’s relevant to your particular audience or stakeholder.

Be Ready to Prove Your Worth

What does the exhaust of your activity tell you about your impact?

“Review your calendar, e-mails, and projects for indicators.  Make a list of everything you’ve accomplished in the past year, and choose the 10 most powerful or important accomplishments.  Try to assign a dollar amount, measurable result, or benefit to the company for each one.  Having this list of accomplishments prepared will make you ready to prove your worth to everyone at your organization.”

What a great exercise!  It’s one thing to get results and know what you’ve done.  It’s another to articulate it in a simple way.   Preparation is key here.  You can fumble around on the fly and try to shoot from the hip, or you can put together your short-list of big achievements for the past year.  I recently did this exercise, and I was surprised by how much I had forgotten about.   Rehydrating the work I did and the impact it made, not only helped me tell and sell a simple story of impact, but it also helped refuel me for the days ahead.

Garfinkle shares a great quote from Vince Lombardi to light up the idea of committing to excellence.

That’s powerful stuff.   It’s a reminder to choose your pursuits carefully and that your by-products can be amazing things.   It’s like that quote, “Shoot for the moon. Even if you miss, you’ll land among the stars.”

“Understanding other departments is the key to successful peer influence.  Develop connections with managers of other departments.  Learn what they do, what their responsibilities are, how much influence they have, and why they are important to the company overall.  Find out what is important to them, whether they feel respected as a department, and why.  Discover as much as you can about other areas of your company and their people so you can build rewarding cross-functional relationships.”

This is my favorite nugget in the book.   It’s a reminder to see the system you’re in and the ecosystem around you.   As a program manager, I naturally do this, but only after years of practice.  You learn a lot of things when you see the ecosystem, such as where the shared goals are, collaboration opportunities, and how to leverage the system.    Taking this balcony view also helps you see and anticipate things long before they happen.  You see the writing on the wall, and you learn who’s who in the zoo.  By playing your cards right, you can build more effective relationships that transcend your immediate boundaries.  To put it another way, this is the secret of making more impact and influencing without authority.

The Getting Ahead: Three Steps to Take Your Career to the Next Level, by Joel A. Garfinkle is available on Amazon:

Getting Ahead: Three Steps to Take Your Career to the Next Level, by Joel A. Garfinkle

Previous Post:Motivating Yourself the Simple Way
Next Post:The Power of the Present