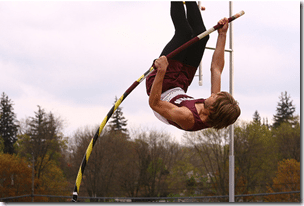 “Success is how high you bounce when you hit bottom.” – George S. Patton

How do you act when you just absolutely know you’re going to nail something?  I bet a lot differently than when you think you haven’t got a shot.

The Day I Knew I Could Vault Higher

One of the highlights in my life was clearing 10 feet with a pole vault.  That’s not a lot in terms of pole-vaulting possibilities, but it was the day I learned how to bend the pole.  When you bend the pole, you can clear more height.

Strangely, I didn’t really “learn” to bend the pole.  That day, I simply knew that I could.  I fully believed that I could plant the pole, hoist my body up, bend the pole back, and fling my body over the bar.

And that’s exactly what I did.  It was like poetry in motion.

It’s a good thing I fully expected that I could do it, otherwise, I seriously don’t think I could have thrown my body over 10 feet in the air.  Pole vaulting is a non-trivial thing where a lot of mechanics have to come together to pull it off.  In another example, I cleared my neighbor’s fence while racing to get a ball.  I simply “high-jumped” the fence.  Looking back, in that case, I don’t know how I cleared the fence (it was a high fence), other than I didn’t know that I couldn’t.  Without a limiting belief to stop me, I simply jumped the fence.  The pattern I’ve noticed throughout life is, you get what you expect and you get more of what you focus on.

In the book, Unlimited Power: The New Science Of Personal Achievement, Tony Robbins writes about how having great expectations of success creates a success spiral, and how the opposite is also true.  You spiral up or spiral down based on your own expectations.

Believe You Will Succeed

”Let’s say you begin with great expectations.  More than expectations — you believe with every fiber of your being that you will succeed.  Starting with that direction, clear communication of what you know to be true, how much of your potential will you use? Probably a good deal.  What kind of actions are you going to take this time?  Are you going to drag yourself out and take a halfhearted shot at it?  Of course not!  You’re excited, you’re energized, you have great expectations of success, you’re going to go great guns. … It’s the opposite of the vicious cycle.  In this case, success feeds on success and generates more success, and each success creates more belief and momentum to succeed on an even higher scale.”

Maintain the Belief Systems that Empower You

Don’t let anybody take your power away.  Especially you.  If there’s one thing to keep through life it’s your personal belief system that empowers you.

“Do resourceful people screw up?  Sure they do.  Do affirmative beliefs guarantee results every time?  Of course not … But history has shown time and again that if people maintain the belief systems that empower them, they’ll keep coming back with enough action and enough resourcefulness to succeed eventually.”

Sometimes Just Not Having a Limited Belief is Enough

Have you ever surprised yourself with your own ability?  Sometimes you pull things off because you didn’t know you couldn’t.  There are many stories of people that did things that were “impossible” simply because they didn’t know they couldn’t be done.

“Sometimes it’s not necessary to have a tremendous belief or attitude about something in order to succeed.  Sometimes people produce outstanding results simply because they don’t know something is difficult or impossible.  Sometimes just not having a limited belief is enough.”

Previous Post:Top Productivity Blogs
Next Post:How Negative Emotions are a Call to Action