How Effective Leaders Get Their Team on Board 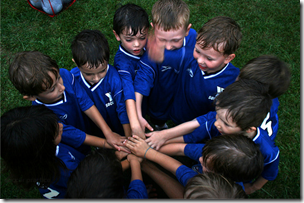 “Deep and sustainable change…requires changes in behavior among those who do not welcome the change.” ? Douglas B. Reeves

To get people on board with any idea or any transformation takes buy in.

Buy-in is a process and it takes a purpose and a plan, as well as getting people involved in co-creating the future.

People like to own their destiny and help shape it.

And, most importantly, they like to see how they can play a part in the future, especially, their future.

In the book, The Strategist: Be the Leaders Your Business Needs, Cynthia A. Montgomery shares how effective leaders build buy-in and get people and their teams on board.

Getting Your Team on Board

Fill others in on your thinking and enlist their knowledge when you create plans.  As one of my mentors puts it, “Get their fingerprints on it.”

“Even as you strive for a big-picture view of your business, you need to become intimate with it at the ground level.  After all, you’re leading a group effort.  You need to connect with people throughout the business so that you can both inspire them and learn from them.  If you don’t  fill them in on your thinking, they’re not likely to make strategy part of their agenda.  And if you don’t enlist their knowledge in creating plans, you are wasting an invaluable resource.  As the people who talk with the customers and do a lion’s share of the work, they possess information you can’t do without.”

You need to be aware of how well others accept your plan.

“Thosas Saporito, chairman of RHR International, a management development firm, believes that many leaders get so locked into their own vision that they resist hearing when others don’t believe in it.  One executive he coached, a CEO of a Fortune 100 company, set ambitious goals but focused more on the soundness of his strategy than on others acceptance of it: He ‘was so blind to how the board and employees really felt about it, that he couldn’t gauge their low levels of buy-in.’  He was eventually asked to step aside.”

One of the best ways leaders can be effective is to enable everybody to participate and be publicly accountable.   Otherwise, it’s not leadership.

‘Almost every CEO I’ve worked with stumbles at some point because of this,’ Saporito wrote.  ‘When that happens, I remind them that executives don’t get paid to be right.  They get paid to be effective.’

Max De Pree was eloquent on this subject as well.  He believed that everyone in an organization has a right to understand strategy and a right to be involved in it.  ‘Good communication is not simply sending and receiving.  Nor is good communication simply an exchange of data,’ he wrote.  ‘The best communication forces you to listen.’  Throughout, however, De Pree recognized that leaders have an obligation to provide and maintain momentum: ‘It is the feeling among a group of people that their lives and their work are intertwined and moving toward a recognizable and legitimate goal.’ Such momentum comes from a ‘clear vision of what the corporation ought to be, from a well-through out strategy to achieve that vision, and from carefully conceived and communicated directions and plans that enable everyone to participate and be publicly accountable in achieving those plans.’

Have a Purpose and a Plan

To get people on board and to get them excited, you need to appeal to their core values.  You can do so with a vision and plan.  People like to know where they are going and why it’s worth it.  People will fight for a cause.

“Napolean put it this way: ‘Define reality, give hope.’

That great advice acknowledges the importance o facing and interpreting hard-nosed economic reality (as Manoogian of Masco did not), underscores the need for a purpose and a plan (as we saw in IKEA and Gucci), and recognizes the human need of team members to be motivated and assured.  In rallying the Gucci troops around his new purpose, De Sole made it his job to keep people informed, while also responding to the rapid business changes around him.

‘I was very good at motivating and communicating with people.  I used to give speeches in the cafeteria so that everyone would know what we were doing,’ he said in an interview. ‘I was very decisive in upgrading personnel and making very hard decisions.  I was disciplined, and under real pressure to perform.  It was a constant process of making changes.’

The hard and the soft, all in one.”

Start with a Deep Dive, But Continue an Ongoing Strategic Conversation

To begin the journey, start with a deep dive, but keep the conversation going.   Keep it strategic and help people understand what to start doing, stop doing, and what to do more of.

“Taylor of AmREIT speaks with enthusiasm about working on strategy with his team.’It starts with a deep dive,’ he says, ‘but then continues as an ongoing strategic conversation.  Discussion is honest, open–which is particularly important when issues are tough.’ It took time and effort to reach this point, he adds.  ‘;Over the last ten years we have had to let go of a lot of ego and power levels.’ Now the team has a common language around strategy.  Today, it’s the glue: ‘We have conversations that relate to strategy in some way every week.’

If a leader shortchanges questions of strategy, an organization and everyone in it will suffer.  If a leaders shortchanges the team and fails to clearly communicate that strategy, listen to others, or inspire them to get on board, the outcome will be equally bad.  As a strategist, that means your ability to communicate–and to connect with others in the organization–is as vital to your success as anything else you do.”

If you want to get people on board have a purpose and a plan.  Get their fingerprints on the plan.   And create a compelling vision inspires everybody and breathes new life into their daily work.

Be a Fire Starter

It Starts with Strategy

Strategy as a Way of Life
Next Post:The Strategy Wheel (The Big Picture View of How You Will Win)