How I Used Richard Branson Fridays to Be More Bold 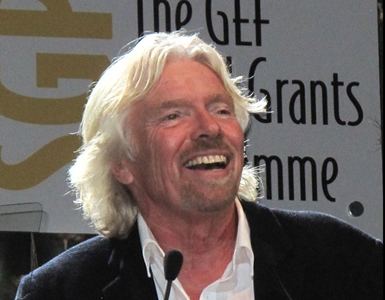 “Most obstacles melt away when we make up our minds to walk boldly through them.” — Orison Swett Marden

Many moons ago, in a land not far away, a reader of my blog told me that they liked me better in real life than on my blog.

They said they liked my blog, but that I had so much more to share than what showed up in my writing.

One day, I decided I would do an experiment to build my boldness.  I created the idea of Richard Branson Fridays.

On Fridays, I would show up as Richard Branson.

I made a decision that I would add an experiment in the pursuit of boldness and I would show up on Fridays as if I was Richard Branson.

I would ask myself, “What would Richard Branson do?”

I would try to feel, how I believe Richard Branson would feel, walking into a room, making big bold decisions, and acting full of confidence, and creating amazing clarity around the future.

At First, I Was Not So Bold

I was off to a slow start.  I wasn’t really sure what to do, and I found myself over-thinking the process (and that was a big part of the problem.)

I had to get out of my own way.  I had to stop thinking, and do more feeling – to feel as if I was Richard Branson.  It helped that I had read a few of Richard Branson’s books, including The Virgin Way, Screw It, Let’s Do It, and Finding My Virginity.

And, even though I was just mimicking what Richard Branson might do, I was afraid of losing myself.

But then I realized, now matter how much I play pretend, I’m still me.  (Plus, I had the whole rest of the week to revert to my former self if need be.)

This was just another way to explore and expand what I was capable of, while learning how to be more bold – and have fun in the process.  And it actually changed me, by helping me be more me.

It helped me find a better, bolder me that was hiding inside.  It helped me be all of me.

The more I learned how to boldly walk through obstacles.

It turned out to be, a great way to realize my full potential.  It was a very real way to find the edges of opportunity for growth and greatness.

In addition to feeling more alive and flowing with energy, I started to use it various settings and scenarios that would ordinarily be high stress.

I ended up playing the role of “head coach” of Satya Nadella’s Innovation Team (Satya is CEO of Microsoft, a little software company that changes the world.)

This really required me showing up with bold ideas to shape the future and to help business leaders change their game.  It also required that I help a lot of smart people come together around those bold ambitions and create clarity and confidence as we headed into the unknown. (Side note – I also ended up becoming a “CEO Whisperer” as a result of my new found boldness.)

More importantly, Richard Branson Fridays gave me a way to practice and perform pushing my boundaries while feeling the edge of my comfort zone.

It gave me a way to push past my boundaries, because I was no longer limited by what would I do, I could at least play with the idea, of what might somebody else do, if they were in this same situation.

In a word, it gave me new perspective.

Get Past Limiting Beliefs with Richard Branson Fridays

We are really good at mirroring and mimicking other people.  After all, we have the most advanced mirror neurons than on the planet.

We just don’t use them as much as we should.

We get in our own way with limiting beliefs and self-doubt or a limited identity.

Instead of seeing our full range of capability and our full power of possibility, we see our limits, or we see limits others imposed on us, that we didn’t really challenge.

And then we get in our own way.

We get in the way of our mirror cells.

Richard Branson Fridays is a Way to Switch Perspectives

De Bono used the idea of switching on a metaphorical or imaginary “hat” so that you could temporarily suspend your disbelief and think in a new, and very different way.  For example, if you are always negative, now it was OK to think positive (or vice-versa).

Thoughts are habits.  And we tend to think in ways consistent with our character, our flaws, our biases, and all.

But we can break our thought habits when we play with personas and really ask what somebody else might do.

Richard Branson Fridays is also similar to the idea that Napolean Hill used to “emulate the great”.  Hill would consult his “imaginary council” to reshape his character and add perspectives to his thinking and judgment.

First Stop, Boldness.  Next Stop … the Sky is the Limit

Keep in mind, you are not limited to Richard Branson.  There is a world full of inspirational people with amazing abilities you can learn and emulate from.

I just wanted to share a very real story, with very real results, that maybe you can benefit from or use in your own life.

Who knows, maybe you want to learn how to think like Bill Gates.

Play at your possibilities and explore your art of what’s possible.

Amazing Lessons from People (the Greatness Distilled Series)
Emulate the Great
How To Think Like Bill Gates
How To Use Six-Thinking Hats to Improve Your Thinking
Mirror Neurons: Cells that Read Minds

How I Hit Refresh on Sources of Insight
Next Post:How To Have More Effective Meetings