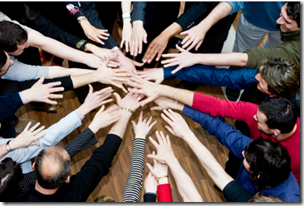 ”None of us is as smart as all of us.” — Ken Blanchard

How do you consistently build a winning team?

I think successful coaches are good to learn from.

After all, they have to build effective teams time and time again, while dealing with people issues and finding ways to make the most of who they’ve got.

In the interview, Feldman asks Coach “JoePa” about his secrets for building winning teams and group cohesiveness.

I think Coach Joe applies a lot of the principles I’ve seen work in practice.

Here are five key ways to build a winning team every time:

This technique is about building pride.  There’s a big difference between being on a team you’re proud to be on and a team you’re embarrassed by. Joining a team that’s great to be on, can help set the tone ad pace that brings out everybody’s best.
The team has to be special. Feldman asks Coach Joe about how he molds individuals into a winning team:

This technique is about developing leaders within the team.  I’m a fan of growing others and learning in the process. I think on a team in today’s world this is particularly important. If you’re the bottleneck for everything that gets done, then you put a glass ceiling on yourself and on the team. I always try to work myself out of a job, by teaching others and improving the job itself.
Coach Joe says it’s not just about him; he develops leadership within the team:

Technique # 3 for High-Performance Teams – Appear to Be Fair

This technique is about appearing to be fair.   I think this is especially important. I’ve been on team’s where where everybody has a shot. I’ve also seen the opposite. There’s a big difference between putting the best player in a position versus playing favorites. Who continues to give their best, when the best it trumped by favoritism?
Coach Joe says it’s not about playing favorites:

This technique is about focusing on individuals and knowing their strengths and weaknesses.  At the end of the day, a team is a group of individuals. Appreciate the individuals for how they are.
Coach Joe says it’s their team, not his:

Building Trust on Your Teams