I Believe In You 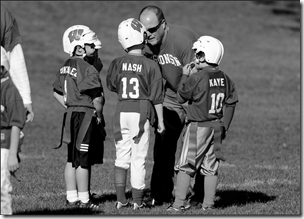 “Believe in yourself, take on your challenges, dig deep within yourself to conquer fears. Never let anyone bring you down. You got to keep going.” — Chantal Sutherland

Did you ever have somebody believe in you more than you did?

I did.  My 7th grade Algebra teacher believed in me.  So did my pole vaulting coach.  I never would have pole-vaulted on my own.

Whether it’s a parent, or a teacher, or a coach, or a friend, the people in our life can lift us in amazing ways when they believe in us.

Even if it’s just enough, to help us believe in ourselves.

In The Heart-Led Leader: How Living and Leading from the Heart Will Change Your Organization and Your Life, Tommy Spaulding shares the story of Coach Veltidi, and how he helped Tommy believe in himself.

Do you give others the courage to go beyond their own expectations?

You do when you believe in them, and you let them know, in an authentic way.

“I believe in you.  They are among the most beautiful words you can say to someone.  But how many people in your life or organization actually here that from you?

And how often do they hear it?

The word encouragement means ‘to bring courage to others.’

When you encourage people–when you show you trust in them–you are giving them the courage and fortitude to go beyond their own expectations for themselves.  Heart-led leaders realize that encouraging others is a game-changing opportunity, both for the leader and for the person who is encouraged to do something great.”

The Coach Believed in Tommy

Bob Veltidi was the varsity football coach at Suffern High School.  Tommy Spaulding was an average athlete on the baseball, soccer, and ski teams.  Coach Veltidi asked Tommy to try out as a kicker for the football team.  He said he needed people on his team who were leaders.

After practicing his heart out, Tommy won the starting kicker position for the team.

”When I told him I’d be wiling to give it a shot, he gave me a quick lesson in kicking, then handed me a bag of footballs and a kicking tee and told me to be ready for tryouts in August.

Before I left his office, he looked me in the eye and recounted the most magical words any coach can say to a player: ‘Tommy, I believe in you.’”

In the final moments of an undefeated season, Tommy’s team was down 21-19.  Tommy needed to make the field goal or his team would lose, and no longer be undefeated.

Tommy could make 30-yard field-goals.  It’s what he practiced.

To win this game, it would take a 37-yard field goal.

In this moment, while everything was on the line, and Tommy’s heart was in his throat, Coach Veltidi reminded Tommy, once again, the he believed in him.

Tommy scored the game winning kick, his teammates carried him off the field, and a headline in the paper the next day read: “Suffern Wins on Spaulding’s Kick.”

”’Spaulding, I asked you to be on this team because I believe in who you are as a person, not just a player,’ he said.

Then he grabbed my face mask, pulled me in close, and once again repeated the four words every player wants to hear from the coach: ‘I believe in you.’”

The Profound Impact on One Person’s Life

Years later, Tommy was asked to speak at a Game Changers Conference, an audience of thousands of high-school coaches.  Tommy asked Coach Veltidi to join him.

At the conference, Tommy told the audience that while good coaches may win games, great heart-led coaches build a legacy of leaders around them.  He then played a video of his game-winning kick, and talked about how Coach Veltidi had a profound impact on his life.

Tommy then introduced Coach Veltidi to the audience and asked him to stand and be recognized.  Tommy thanked him for being the game changer in his life, and the crowd went wild.

”He later told me that it was one of the greatest moments of his life–it meant so much for him to hear about the impact he had as an educator, and to know that he was able to so profoundly affect even one person’s life.”

Did somebody believe in you, when others didn’t?

Have you thanked them for this gift that keeps on giving?

If nobody believes in you, remember the words of Sugar Ray Robinson:

“To be a champ you have to believe in yourself when no one else will.”

I Get By with a Little Help from My Friends

Am I Going to Die?
Next Post: How To Use Distinctions to Think Better and Deeper About Information