It’s Not Just a “Team Effort” 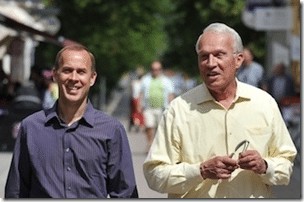 Editor’s note: This is a guest post by Bob and Gregg Vanourek on how successful leaders leverage the leadership capabilities of everyone in an organization.

Rather than a "team effort" that simply translates to a leader with followers, Bob and Gregg share a “team of leaders” model, where everyone unleashes their leadership potential.

Bob and Gregg are authors of the book, Triple Crown Leadership: Building Excellent, Ethical, and Enduring Organizations. Because of their breadth and depth in the leadership space, I asked Bob and Gregg if they would share their best insights and actions with readers of Sources of Insight.

Without further ado, here is Bob and Gregg on how leadership is not just a “team effort” …

We often hear, when a championship has been won and a sportscaster is interviewing the MVP-hero, that it was a “team effort.” Everyone nods, and then the interviewer immediately asks the hero about his stats and his game-breaking moves.

We’re a culture of hero worshippers, focusing on the star and politely acknowledging his or her loyal followers. But this team-effort focus on the star with loyal followers is misguided, certainly in the world of business and nonprofit organizations seeking to be great.

How and why do we derive this conclusion?

We are great admirers of Apple products but not fans of the late Steve Jobs’ often-mercurial leadership style. Yet there are valuable lessons to learn from Jobs, including his desire to build “insanely great products,” putting a “small dent in the universe.”

“There will be a personal computer on every desk running Microsoft software.”

Leaders Should Build an Excellent, Ethical, and Enduring Organization

Leaders should commit to build an excellent, ethical, and enduring organization.

Nothing less will do.

Like the eleven thoroughbreds that have won the Triple Crown since 1875, the quest to be excellent, ethical, and enduring is difficult and challenging, but not impossible.

Our research, including interviews with sixty-one organizations in eleven countries, unpacks the five practices cutting-edge organizations, startups, and even some turnarounds are using to implement triple crown leadership. See J.D. Meier’s detailed review of Triple Crown Leadership at https://sourcesofinsight.com/triple-crown-leadership/

Here we focus more deeply on several other leadership concepts from Triple Crown Leadership and the actions you can take to implement them.

When Secretariat won the third leg of the Triple Crown in 1973 at Belmont by an incredible thirty-one lengths, setting a world-record time that stands to this day, experts said he was a Superhorse, a once-in-a-lifetime, freak occurrence.

We interviewed Ron Turcotte, Secretariat’s jockey, and Leonard Lusky, the President of Secretariat.com. We learned a different story.

After winning the Kentucky Derby and the Preakness, Secretariat’s trainer, Lucien Laurin, approached the owner, Penny Chenery, with a daring new training strategy for the brutally long Belmont Stakes. Train Secretariat hard, not easy, for the 1.5-mile race to capture the Triple Crown. It was a bold proposal. When Secretariat broke from the gate in the lead, jockey Turcotte let him run, blending with the stallion in a state of unbridled flow.

Spectators were shocked at the pace. Kent Hollingsworth, editor of a leading horseracing publication, said, “I don’t believe it. Impossible. But I saw it. I can’t breathe. He won by a sixteenth of a mile…. He ran so far beyond known reference points, he left us with no measurable comparison.”

Pete Axthelm wrote in Newsweek, “When he accelerates, he produces a breathtaking explosion that leaves novices and hardened horsemen alike convinced that, for one of those moments that seldom occur in any sport, they have witnessed genuine greatness.”

The story of Secretariat is about more than astonishing athleticism, a gigantic physical heart (twice the normal size), and the will to win. It is also about the metaphorical heart as well as character, stewardship, flow, adversity, and inspired leadership from every team member.

Lusky told us, “It took the whole Meadow Farm Stable—Penny Chenery’s father, Penny, a great trainer, all the exercise riders, the groom who makes the horse comfortable, and the jockey—in addition to the horse’s bloodline. It takes all these parts together to win the Triple Crown.”

So it is with organizations. Triple crown leadership is a group performance.

Focus on Leadership, Not the Leader

Leadership is not the sole prerogative of people with fancy titles, corner offices, and loads of frequent-flier miles. That is one of the fallacies holding so many enterprises back. We purposefully focus on “leadership,” not the “leader.”

Triple crown leaders believe sincerely in the capabilities of their colleagues. They know anybody and everybody can lead at different times, no matter where they are in the organizational hierarchy.

Triple crown leadership works up, down, and sideways.

Unleash the Extraordinary Talent from Everyone

Triple crown leadership unleashes the extraordinary potential latent in people that languishes in far too many organizations. David Barger, President and CEO of JetBlue Airways, advises, “Be mindful that there is incredible leadership all around you. Go find it. Go tap it. Go mine it.” Once activated, such leadership can be transformative for the organization and life changing for the people involved. Unfortunately, this leadership dynamic is all too rare.

Many people are reluctant to seize the reins of leadership. Jim Unruh, the turnaround CEO at Unisys, told us, “I was shocked at how very senior executives in the organization wanted me to tell them what to do.” Leaders must sometimes go out of their way not to lead, thereby enticing others to step up.

Bob Hatcher, founder and CEO of MidCountry Financial, told us, “If you have to lead everything, you’re just aggrandizing yourself. The real world needs empowered project teams, individual leaders, all kinds of folks, to have success in their professions and their lives.”

Bill Drayton, founder and CEO of Ashoka, a global network and funder of leading social entrepreneurs, told us, “The old organizational model where a few people decide things, and then ‘manage’ everyone else, just can’t function in today’s environment…. A team is characterized by the fact that every single person takes the initiative and is a ‘changemaker.’”

Anyone can lead, regardless of whether they have formal authority. No matter their title, people can influence others through their behavior.

With triple crown leadership, everybody has a license to act, as long as they do so in accordance with the organization’s purpose, values, and vision. Over the years, we have witnessed amazing contributions from many people without authority—including young, aspiring leaders without much experience.

They bring fresh energy and perspectives to meetings, challenging assumptions and pushing back when even senior leaders operate unethically or unsustainably.

Sometimes these younger people have great instincts and insights but lack the confidence to promote them. When one person speaks up, it empowers others to do so as well. After a few times, it creates powerful momentum. Over time, it creates a triple crown culture.

“At Google,” Judy Gilbert, former director of talent and now director of people operations at YouTube, told us, “We encourage everyone to take ownership of something, to make things happen, to pull small groups together, to live out the values.”

As an example, she cited the Google shuttle program, started by someone without any formal leadership role who just wanted to get as many cars as possible off the road to reduce the company’s carbon footprint. Google implemented her program throughout the San Francisco Bay Area.

“You can’t surrender to the options before you.

Triple crown leaders, with or without authority, reject the easy way out and find another way forward. They don’t cut corners to make their numbers or launch dates at all costs. They find another way.

Triple crown leadership sometimes entails constructively challenging people to do what they think is impossible, much as Steve Jobs used to do (albeit often in a less than encouraging way). Often people produce astonishing results.

When the challenge is to make the numbers short- and long-term, and to do it ethically, while operating sustainably and honoring obligations to all stakeholders, that is when people really dig in and find another way, a new way, refusing to settle for the easy way out.

It’s not just a “team effort.” It’s a team of leaders effort.

“I always wondered why somebody didn’t do something.

Then I remembered. I was somebody.”