Jackie Robinson: A Story of Self-Control 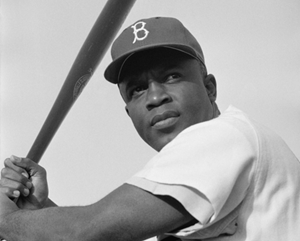 Emotional maturity and self-control are the key to better thinking and better actions.

If it’s easy for other people to push your buttons, it might help to have some hope and heroes to draw inspiration from.

Jackie Robinson was a world-class example of emotional maturity and self-control.

He stood strong when tested, and what didn’t break him, made him stronger.

In the book, Negotiating in the Leadership Zone, Ken Sylvester shares the story of Jackie Robinson as an example of world-class self-control.

A World Class Demonstration of Self-Control

Whenever you think you have it tough, and people are pushing your buttons, consider what Jackie Robinson went through.  It might help you put your own challenges in perspective, just by remembering how bad things really can be.

Jackie Robinson Stepped Up to the Plate

Jackie Robinson knew it would be a series of trials, setbacks, and extreme challenges.  But he promised to keep his cool and maintain self-control, no matter how ugly things would get.  He would rise above the challenges by focusing on playing his best game.

“For Robinson, the first African-American man to have the opportunity to participate in the major leagues for the Brooklyn Dodgers, it was all about playing the game.  He was hand-selected by President Branch Rickey and the Dodger organization to cross the precipitous ‘color line.’  Robinson promised Rickey that he would not fight back, other than with his bat and glove, despite what teammates, competitors, fans, umpires, writers, broadcasters, and hotel managers might have said or how they tried to bait him into reacting.”

Jackie Robinson was put to the test.  He faced emotionally trying events and challenges on a constant basis.  Even when his world seemed against him, Jackie Robinson would maintain his self-control by focusing on the game, and doing his personal best.

“Robinson agree to take on this challenge.  When he crossed the color lines at the ballpark, Robinson tried to relax and focus on the game, not on the constant catcalls.  Off the field, the former UCLA four-sport star would also deal with bigotry, anonymous death threats, racial slurs, sitting in the back of the bus, ‘no colored’ served or housed here signs, and opponents who were out to injure him.”

Jackie Robinson rocked the world with his outstanding performance.

“Robinson, however, was bound and determined that he would perform to the highest level.  And, that he did.  In his debut season he was named Rookie of the Year, an award which todays bears his name…Robinson was the first African-American player to be inducted into the National Baseball Hall of Fame in 1962.  All of major league baseball saluted him in 1997 (on the 50th anniversary of his breaking the color barrier) and permanently retired his number from the game.”

If you think you’ve got it tough, remember things can always be worse.

If you ever find yourself needing a source of inspiration for self-control, just remember Jackie Robinson and use him as a source of strength.

10 Emotions to Master for Power, Passion, and Strength

How To Free Yourself from Negative Emotions

Use Negative Emotions as a Call to Action

3 Levels of Living – How To Live Better Through Contribution
Next Post:Bruce Lee’s 3 Stages of Cultivation