Just Do It Scared 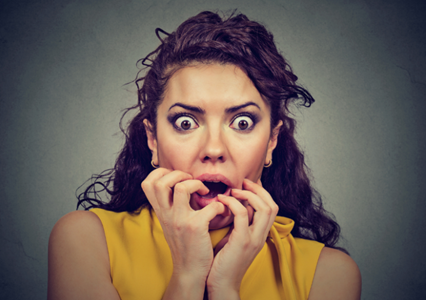 “Do the thing we fear, and death of fear is certain.” —Ralph Waldo Emerson

Some people hold themselves back because they are scared.  They are waiting for confidence.

Sometimes the best way to do something is to just do it scared.

I was watching an exit interview with Sherri Shepherd on The Masked Singer.  Sherri is famous as an comedian, but not as a singer.

In the interview, Sherri says, “I was so scared to do this, because singing is not my forte.”

But then she tells the story of what inspired her.

It was her son, Jeffrey.

She had a tough time, but she did it scared.

Sherri said, “I thought I was going to pass out every single time on the stage.  But I did it, and I feel really good. I feel like gosh, I can do anything.”

It was a great example of feeling the fear and doing it anyway.

When You Face Enough Fears, Life Stops Being So Scary

I was watching Goosebumps 2.  At the end of the movie, there is a scene where Sarah, (played by Masison Iseman), is talking one-on-one with R.L. Stine (played by Jack Black).

Sarah is worried about her abilities to make it as a writer.

As R.L. Stine is getting in his car to leave the scene, he says to her:

“First rule of writing, write what you know.”

R.L. Stine tells her that we all have stories to tell, you just need to write what you know:

And he adds, that he believes in her.

In the next scene, we see Sarah at the keyboard typing away and she she thinks out loud:

“Recount a time in your life when you faced a fear, challenge, or failure.

I think most of us are afraid we don’t have a story to tell.

That there’s nothing special about us.

And then a moment comes when you least expect it where you have to step up, no matter how terrified you are.

But what I’ve learned is that it’s good to be scared sometimes.

Scared of losing the people we love.

Or, scared of not achieving our dreams.

Because those moments remind us just how special our stories really are.

And maybe when you face enough of your fears, life stops being so scary after all.”

What the Sages Say About Fear

Nelson Mandela teaches us that courage is not the absence of fear:

Along those lines, Bear Grylls, a teacher of survival skills, says fear is where bravery comes from:

Rosa Parks teaches us the determination is the destroyer of fear:

“I have learned over the years that when one’s mind is made up, this diminishes fear; knowing what must be done does away with fear.”

“Do the thing we fear, and death of fear is certain.”

Dale Carnegie encourages us to practice what we fear until we win:

“Do the thing you fear to do and keep on doing it… that is the quickest and surest way ever yet discovered to conquer fear.”
William Congreve teaches us that fear comes from uncertainty:

“Fear comes from uncertainty. When we are absolutely certain, whether of our worth or worthlessness, we are almost impervious to fear.”

Helen Keller warns us that the timid are not safe:

“Avoiding danger is no safer in the long run than outright exposure. The fearful are caught as often as the bold.”

Babe Ruth warns us not to miss our opportunities:
“Never let the fear of striking out get in your way.”

Henry Ford warns inspires us with the idea that our abilities are on the other side of our fear:

“One of the greatest discoveries a man makes, one of his great surprises, is to find he can do what he was afraid he couldn’t do.”

Along those lines, Sarah Parish teaches us fear is where the fruit is:

“Living with fear stops us taking risks, and if you don’t go out on the branch, you’re never going to get the best fruit.”

My Favorite Quote About Fear

“When a resolute young fellow steps up to the great bully, the world, and takes him boldly by the beard, he is often surprised to find it comes off in his hand, and that it was only tied on to scare away the timid adventurers.”

It reminds me how much posturing and false courage exists all around us.  Not everybody can stand strong when tested.

It reminds me how many people bully and create fear fear until somebody punches them back  Their power is weak.

And it reminds me how I got over my nightmares long ago.

I used to have nightmares as a kid, pretty regularly (Interspersed with whatever you call the opposite of nightmares – fantasy?)

In my nightmares, I would run away from whatever the monster or situation was, and the harder I ran, the more I was in slow motion or stuck in place.

One day, I got sick of running.  I turned around and punched the monster in the face.  From then on, I no longer had nightmares, or when I did, I simply turned and faced my fear to dissolve or resolve it.

The more I faced my fears, the stronger I got.

Get the Book on Feeling the Fear and Doing it Anyway

Feeling the fear, and doing it anyway, is such a good idea, that there’s a book about it.

It’s called Feel the Fear and Do It Anyway, by Susan Jeffries. 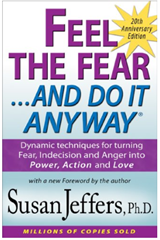 37 Inspirational Quotes that Will Change Your Life

Boldness Has Genius, Magic In It

Live Without the Fear of Death in Your Heart

Tony Robbins on the Fastest Way to Get Over Fear

How To Add New Experiences to Your Life
Next Post:The Ultimate Guide to Your Best Year Ever