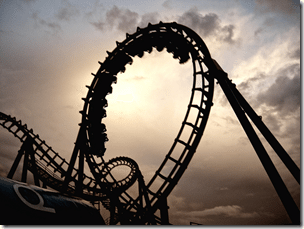 "Insanity: doing the same thing over and over again and expecting different results." — Albert Einstein

What is it that occurs hundreds of times a day that could reinforce a limiting script … that we play over and over again, throughout a lifetime?

In his book, The Process Therapy Model: The Six Personality Types with Adaptations, Dr. Taibi Kahler teaches us about Process Scripts.

According to Kahler, a Process Script is a false belief that starts from our Drivers.  Drivers are behaviors lasting from a split second to 7 seconds and they reinforce a position of "I’m OK if …"

The scripts are reinforced by our sentence patterns (our thoughts), and replayed throughout life in intensity as a function of distress.

Scripts are important because they can help you predict how you might unknowingly sabotage your life.  They can also be used to predict or shape your success.  If you can catch the script, you can change it.  In fact, Dr. Terry McGuire used process scripts and Process Model Therapy to select astronauts for NASA.  He then used it successfully for 18 more years to select, place, motivate, build teams, and predict success and failure of the astronauts.

Limiting Loops that Play Over, and Over Again

Our thought patterns are examples of the scripts we play.  The way we form and say sentences in our mind is a reflection of our scripts.  Our thought patterns form and reinforce our scripts, which may limit our success in multiple ways.  In fact, Dr. Berne, found that he could see a whole life script played out repeatedly from a passing moment or several years.  Basically, a script you play second-to-second, can shape your life a moment at a time.

Here are the drivers that are the basis for the scripts, according to Dr. Kahler:

Here are the process scripts, according to Dr. Kahler:

I think it’s especially interesting because it’s backed with research, case studies, and statistically significant data.  For example, as part of the validation studies, the Personal Personality Pattern Inventory has been administered to more than 700,000 men and women.

In other words, it’s not just somebody’s neat idea.

Don’t Luck Your Way Out of Limiting Beliefs

That said, even if you throw the data and research out the window, it still provides an interesting lens for interpersonal skills, limiting behaviors, and more effective thought patterns.

I also find this especially interesting because folks often have breakthroughs in their life, but don’t know why.  A lot of the times, it comes down to changing a limiting a belief.

They luck their way, or stumble their way into it.

Dr. Taibi’s research and lifetime of work provide a framework for analysis and provide short-cuts to understanding key patterns,

For more on Dr. Taibi Kahler’s work, check out The Process Therapy Model: The Six Personality Types with Adaptations.