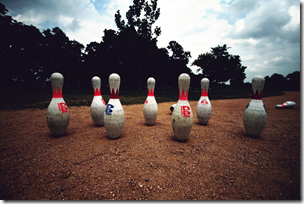 “You must stick to your conviction, but be ready to abandon your assumptions.” — Denis Waitley

Are you sick of other people’s assumptions holding you or your ideas back?

Or, are you stuck because of your own assumptions? (and maybe don’t even know it)

Maybe you need to try some Assumption Bowling.

By testing assumptions, you can break out of the box that you put yourself in, or that others put themselves in.

In the book, Anticipate: The Art of Leading by Looking Ahead, Rob-Jan De Jong explains the practice of Assumption Bowling to knock down assumption “pins” and re-frame how you see things.

According to Rob-Jan De Jong, there are two steps to Assumption Bowling:

As you perform step 1, identify the way things are.  Note the assumptions around your customer’s needs, your products, your ways of working, your success to date, etc.  These should be unchallenged truths that are effectively your core assumption pins.

As you perform step 2, ask yourself, “What if the reverse of that became true?” De Jong provides an example.  Let’s say one of your core assumptions is that your customers value you for your superior customer service.  And let’s say you also believe that customer service is the name of the game in your industry and you are the best at it.

Knock the pin down by asking yourself, “What if superior customer service is no longer as highly valued as it used to be?”

According to De Jong, Steve Jobs was asked to find a successor in 1983.  John Sculley was at PepsiCo at the time and had reservations about joining Apple.

After several negotiations, time was running out and Jobs realized that more arguments wouldn’t work.  He asked Sculley a cutting question:

“The question hit a home run, and Sculley conceded.  It’s a classic example of the power of reframing assumptions, the psychological direction in unlocking your imagination.  The picture Jobs painted of what could be, together with the persuasive final punch line, broke through Sculley’s deeply rooted belief system.  Describing the product that was dear to him as ‘sugar water’ was nasty but ultimately true.  And Jobs didn’t persuade Sculley with the CEO role, but instead offered him to come along to ‘change the world.’  Jobs’ radical, frame-breaking pitch worked and Sculley conceded.”

Gamify your strategic thinking and start knocking those assumption pins down.

It’s Between Your Ears

Test Your Decisions Against Reality

How To Be a Better Visionary Leader
Next Post:Emotional Freedom: How to Let Go of Feelings and Thoughts for a Better Life