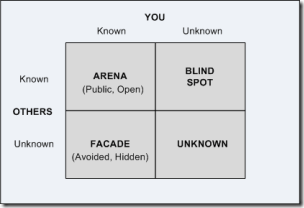 How do you avoid sharing TMI (Too Much Information)?

At the same time, how do you avoid being too reserved or too closed with other people?

One of the keys to effectiveness is to know and show yourself enough.

If you know yourself well enough, you can share relevant information to improve communication and connect with others.

The Johari Window Helps You Share Yourself with Skill

One tool to help you with this is the Johari Window.

I first learned about the Johari Window in one of my leadership training sessions and it piqued my interest.

If you’ve ever struggled with TMI or self-disclosure, the Johari Window is your friend.  The Johari Window was originally created by Joseph Luft and Harry Ingham in 1955 as a tool to help people understand their interpersonal communication and relationships.

The Johari Windows is made of four regions or quadrants:

Key Scenarios for the Johari Window

You can use the Johari Window to help you with the following scenarios:

Reducing Your Blind Spots and Increasing the Open Area

The best communication happens when the Arena is biggest: 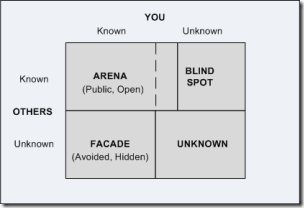 The more you know about yourself and the more other people know about you, the more you can communicate on the same wavelength.  By asking for feedback you can simultaneously reduce your Blind Spot while increasing the amount and quality of information you can share in the Arena. 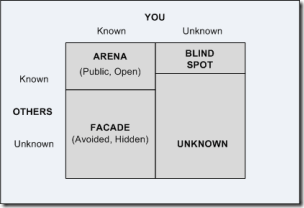 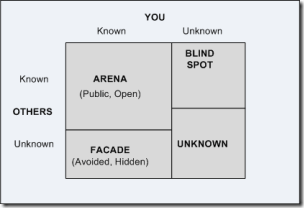 This is an example of an exercise you can do with the Johari Window in a group or team.  The purpose is to share more information and reduce blind spots.  The key steps are:

Here’s a summary of how to place the adjectives::

Here’s a list of the positive adjectives commonly used in the Johari Window exercise (of course there are negative ones as well):

Why Do You Do What You Do?

The :Lens of Human Understanding