Sleep Patterns: Are You a Lark, Owl, or Hummingbird? 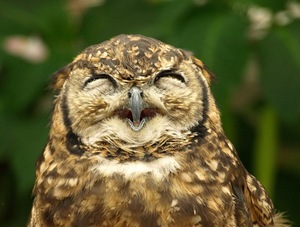 “Laugh and the world laughs with you, snore and you sleep alone.” — Anthony Burgess

When it comes to sleep patterns, some people really are night owls or early birds.

According to John Medina in the book, Brain Rules: 12 Principles for Surviving and Thriving at Work, Home, and School, 30 % of the population is an owl or a lark (an early bird in scientific literature.)

The general sleep pattern of a lark is they tend to get up before 6 a.m. (without an alarm), and want to go to bed around 9 p.m.  Owls tend to wake up naturally closer to 10 a.m. and don’t want to go to bed before 3 a.m.

In general, this means larks tend to get better sleep in our society, and owls build a sleep debt.

I think the key is to know yourself and find what works for you, but this is another lens for looking at your own sleep patterns over your life time.

Larks are the early birds that catch the worm.

“In general, larks report being most alert around noon and feel most productive at work a few hours before they eat lunch.

They don’t need an alarm clock, because they invariably get up before the alarm rings — often before 6 a.m.

Larks cheerfully report their favorite mealtime as breakfast and generally consume much less coffee than non-larks.

Getting increasingly drowsy in the early evenings, most larks to go be (or want to go to bed) around 9 p.m.”

Owls are most productive at night, burning the midnight oil.

“In general, owls report being most alert around 6 p.m., experiencing their most productive work times in the late evening.

They rarely want to go to bed before 3 a.m.

Owls invariably need an alarm clock to get them up in the morning, with extreme owls requiring multiple alarms to ensure arousal.

Indeed, if owls had their druthers, most would not wake up much before 10 a.m.

Not surprisingly, late chronotypes report their favorite mealtime as dinner, and they would drink gallons of coffee all day long to prop themselves up at work.”

You can Detect It in Early Childhood

“The behavior of larks and owls are very specific.

Researchers think these patterns are detectable in early childhood and burned into the genetic complexities of the brain that govern our sleep/wake-cycle.”

Do you remember your sleep patterns from childhood?