Gary Lindberg on Lessons Learned as a Bestselling Self-Published Author 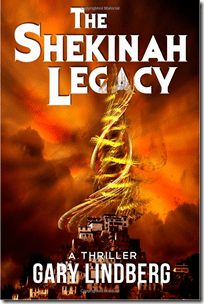 This is a guest post by Gary Lindberg on lessons learned as a bestselling self-published author.

If you are an author, aspiring author, or hope to publish a bestseller, this might be one of the most important posts you read on what it takes to get noticed and rise to the top on Amazon.

As a writer and film producer/director, Gary has won over one hundred major national and international awards.

He is the co-writer and producer of the Paramount Pictures feature film That Was Then, This Is Now starring Emilio Estevez and Morgan Freeman. His debut novel, a thriller called THE SHEKINAH LEGACY, was published in 2011.

How Gary Helped Me Take My Book to the Next Level

I’ve had the pleasure and privilege of meeting Gary earlier this year.

In fact, Gary was the inspiration behind my cover redesign, and he’s been coaching me on how to take my book to the next level. One of the most insightful things Gary said to me about my cover is, “Think of it as selling icons on Amazon.” That instantly changed my mental model and got me on track.

The world of book publishing is rapidly changing, and it’s a new game for self-published authors. I want readers of Sources of Insight to have an edge, so I asked Gary to share his secrets of a best-selling author.

In early April of this year, my self-published novel THE SHEKINAH LEGACY became a genuine Amazon bestselling thriller. In fact, for over a week it was the most popular Kindle thriller on Amazon.

The book was released in December of 2011. For the first two months it sold a whopping 200 copies in trade paperback, Kindle and Nook formats. I honestly wondered if anyone other than friends and family would ever buy and read my book. And then I learned an important lesson: if you self-publish, you also have to promote. In fact, you have to do everything yourself. The question, then, is: how do you produce a successful book?

I can’t claim to be an expert. I’ve only done this once, though I have a second novel in the works and I’m publishing novels for two other authors who needed a leg up. But if you’re up for some anecdotal lessons from a newly minted bestselling author who did it all himself, please read on:

Frankly, no amount or kind of marketing and promotion will work unless you have a good book that people will want to read. I worked hard to write an entertaining novel. What I wasn’t prepared for was how critical the audience out there is about the editing of the text. Editing means proofreading (both typos and grammar), fixing organizational problems, and addressing all continuity issues.

The first edition of my thriller earned a number of reviews that prominently complained about the quality of the editing. This just does not promote sales. Even worse, bad editing suggests the author is careless and thoughtless. Fortunately, with new Print-On-Demand technology and E-book formats, you can easily correct your book and make it available overnight

I tried and failed to edit my own book. If you can afford to spend any money at all on your book, I recommend that you hire an editor before you invest in anything else.

People Judge a Book by Its Cover

I can’t stress enough how important the cover is—even for Kindle and Nook E-books. Your book cover is the only packaging your product has. In many cases, it’s the primary way that many people become aware of your product. So putting on a cheap, home-grown cover will only announce to your potential audience that you are offering a cheap, home-grown book. And who wants to buy that?

If you have any money left over from hiring an editor, spend it on a book cover designer. And be sure to judge the final work by how well it shows up as a thumbnail on an Amazon page that also lists all of your competitors. Does it jump off the page and say, “Buy Me?” Can you read the title (and is the title interesting and provocative)? Your cover is your best marketing tool. Authors I know have seen a noticeable bump in sales when they replaced a sub-standard cover with an improved one.

Your Best Writing Should Be Your Book Description

Your book description is about the only way most readers can judge what’s in the book. Will they like the quality of writing they get in your description? Is your description tight, punchy, and to-the-point? Does it communicate the best parts of your story or message without giving too much away?

Writing a quality book description is immensely difficult because it absolutely has to be simple and short. I spent at least a full day writing and rewriting my book description—and then I threw it away and started over again. Your description is your TV commercial, billboard, and newspaper ad all rolled into one. Make it your best work ever.

Why? Because it’s the future, like it or not. And because it’s terribly difficult and expensive to get self-published trade paperback editions into book stores (you also make much less money on them.) My book is available as an E-book and a trade paperback because I thought having a paperback version would enhance the apparent value of the E-book to potential readers. I think it has done that. It turns out I’ve also sold quite a few paperbacks, a nice surprise—but I’ve sold fifty times as many E-books. I make almost twice as much money per book on Kindle versions sold at $3.99 than on trade paperbacks sold in bookstores at $14.99. Go figure. I say follow the money.

Every reader review you can get for your book on Amazon is worth its weight in gold. Many promotional opportunities are unavailable to books that have less than ten reviews and at least a 4-star review average. If you do nothing else to promote your book, focus on getting reader reviews. It’s hard—on the average about 1% or less of a book’s readers post a review. Friends and family will say they’re happy to read your book and review it on Amazon, but few actually will.

I don’t think it’s fair to arm-wrestle people into writing a review they feel the book doesn’t deserve. Here’s how I handle this: I gift books to family and acquaintances through Amazon (this way the book shows up as a “verified sale” when the reader submits a review on Amazon, boosting its value.) Then I simply ask the reader to submit an Amazon review “if you feel the book deserves at least a four-star rating.” That’s it. I always hope they won’t post a review if it would be less than four stars, but frankly every review is helpful.

Don’t however, take your reader reviews too seriously. Even the classics get panned by Amazon readers. Interestingly, many readers (myself included) report that free book giveaways (see the next section) produce the lowest and often most brutal reviews. In other words, readers who get a book free often are the harshest critics. So be thankful for good reviews, and let the others roll off your back.

In March, Amazon launched a special program for Kindle books. By enrolling in a program called SELECT, an author could make his or her book available for “loan” to Kindle PRIME subscribers. An author could also choose to give away his or her book for free to Kindle users for up to five days during each 90-day period. During this period, the E-book version can only be sold in Kindle format.

Why do I mention this? First, because when PRIME subscribers “borrow” your book, you are paid for each borrow. During some months I made almost as much money per borrow as I did per Kindle sale. Not bad—plus it expanded my group of readers.

Secondly, I learned that after a free promotion of my book, I started selling a lot of books. The actual mechanics of this could be the subject of a lengthy dissertation—but for me it worked wonders. During my first three days of a free promotion, I gave away close to 30,000 Kindle books. This broke a record at that time, so my results may not be typical. Yet other authors also saw significant giveaway numbers. The important thing is that within a couple days of my promotion I started selling Kindle versions of THE SHEKINAH LEGACY—thousands of them. Within a couple of weeks I was a MOVER AND SHAKER on Amazon and the most popular Kindle thriller, outselling the famous authors for a time.

Since my first SELECT campaign, Amazon has tweaked the program mechanics so less exposure is granted to authors who give away books, but it is still a valuable way of reaching your target audience.

It’s Time to Publish Your Book

I am living proof that an author can spend almost nothing to produce a trade paperback and E-book version of a book, and even less on marketing and promotion, and succeed. Publishing is a brand new world today. Isn’t it time to publish your book?

Gary Lindberg is the best-selling author of THE SHEKINAH LEGACY.

10 Steps to Finding Your Happy Place Book Summary
Next Post:Career Books That Get the Job You Love or Love the Job You’re With