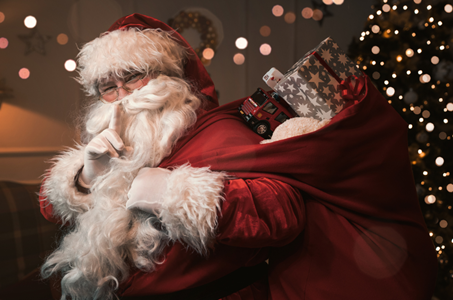 “Dear Santa, I have been nice all year.  Most of the time.  Once in a while.  Never mind, I’ll just buy my own stuff.” — Anonymous

Well, it’s the holiday season, so I thought I’d share some lessons from old St. Nick.

Santa has always been one of my heroes.

Granted I never thought much of his outfit and never wanted to dress like him on Halloween, but all in all, he’s a great role model in other areas.

Everybody’s got their strengths and weaknesses.  While fashion is not his forte, he’s got that relentless positive attitude and a contagious laugh.

The thing is, you can learn something from anybody if you want to.  The world’s cast of characters is your candy store of positive attributes.  You don’t have to like everything about them. Instead, just find the things you want to model from.

These are in no particular order.  It’s just a starter set of lessons from Santa (or The Jolly One, as I like to call him):

Don’t take yourself so seriously or you’ll never make it out alive.  Laugh hard, laugh often.  I’m sure Santa has his off days, but overall he’s a jolly camper.

He knows misery loves company and he knows that if you laugh, the world laughs with you, and if you cry, you cry alone.

Santa just wouldn’t live it any other way.

In Santa Claus is coming to Town we see Santa follow his heart, despite the resistance.

Is Santa just following his Golden Circle or did he read the Dip ?

I’ve never seen anybody with more passion in their work.  Granted, it’s officially only one day, but he lives his values throughout the year. (Maybe he read The 4-Hour work Week: Escape 9-5, Live Anywhere, and Join the New Rich),

Yeah, there was one year, The Year without a Santa Claus, where Santa was going to take a holiday, but it was because he didn’t feel valued.

All it took was one little girl to lift him back on his feet.  She wrote a letter to Santa how she’d have a blue Christmas without him. Next thing you know, he’s back on the saddle again.

Ah, the power of prose!

Surround yourself with a great team.  You don’t have to be great at everything and you don’t need to go it alone.

Santa’s got a team who’s got it back.

From elves to reindeer to Mrs. Claus, he’s got his bases covered.   The sum is way more than the parts.

6. Find your voice, help others find theirs.

No doubt, Santa found his calling.  He’s the best at what he does.  If you know the story of Rudolph the Red-Nosed Reindeer , Rudolph’s shiny bulb makes him leader of the pack, and an elf finds his calling as a dentist.

And let’s not forget the abominable snowman, Bumble.  He gets to put the star on the top of the tree.  It might not seem like much, but it meant a lot to him.

Somehow, I almost forgot about the Island of Misfit Toys.   Santa even finds homes for outcast toys like Charlie-in-The Box and a cowboy who rides an ostrich.

There’s that power of positivity again.  Sure, I know you can get coal in your stocking, but Santa’s main focus is not what you did wrong, it’s what you did right.

Hinkle never planned on being the bad guy and Santa knew this.  He even tells Hinkle he might find a gift in his stocking if he writes out an apology.

I doubt Santa’s friends were supportive when he first shopped the idea of wearing a bright red suit with a sack of toys over his shoulder.

That didn’t stop him.

If he didn’t believe in himself first, he never would have pulled it off.  Confidence before competence.

Santa’s joy comes from making other people happy.  He doesn’t expect anything in return.  But, what goes around comes around.

If you’ve seen The Year without a Santa Claus, you know what I mean.

When the kids found out Santa was taking a holiday, they decided to make him presents.

Plucks at your heart strings, doesn’t it?

If you believe in magic, you find magic.

In Frosty the Snowman , Frosty melts, but Santa brings him back to life with a gust of wind because Frosty’s made of Christmas snow.

It’s never too late to lead the life you want to live.  If you’ve seen Mr. Magoo’s Christmas Carol, all it took was one night (and 3 ghosts), to turn Scrooge from a miserable miser to a charitable, community rock star.

The more Scrooge gave, the more he got.

Now, I could go into Santa’s productivity practices, but that’s another day.  Rumor has it he’s working on his new life style book, The One-Day a Year Workweek.

The bulk of it is about how to use elves to outsource your life so you can free up your time, which is how Santa makes time to get jiggy with Mrs. Claus.

… Merry Christmas, happy Hanukkah, and happy Kwanzaa to all, and to all a good night!

Previous Post:Learning Styles: Concrete, Abstract, Random, and Sequential
Next Post:Start with Something Simple