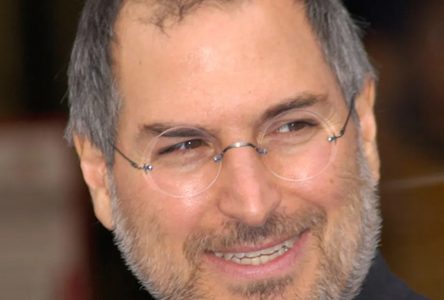 “It better be worth it.” – Steve Jobs

Steve Jobs lifts us.  He leads by example and challenges us to see a better world and lead a better life.

He has an aura and a way of engaging you in an inspiring way.

Whether it’s on the stage or in the halls of Apple, people feel Steve Job’s presence.

Through a blend of beauty and engineering, Steve Jobs changes the way technology changes our lives.

In a relentless pursuit of simplicity, excellence, and passion, Steve Jobs is Arete in action.   He lives his values, and he lives life on his terms, and he challenges us to do the same.

When it comes to innovation and excellence, Steve Jobs raises the bar for himself and for others, while pushing the envelope of what’s possible.

He moves the ball forward by asking the tough questions,  exercising extreme focus, and baking brilliance and beauty into a way of living and leading.

Jobs has paved a powerful path of innovation, excellence, passion, and prosperity and has modeled a way of leadership that’s all his own.

Here are some of the key lessons we learn from his journey:

The lightness of a beginner frees up creativity.  Steve says, “I didn’t see it then, but it turned out that getting fired from Apple was the best thing that could have ever happened to me.

The heaviness of being successful was replaced by the lightness of being a beginner again, less sure about everything. It freed me to enter one of the most creative periods of my life.”

Life’s brief, then you’re gone.  Steve says, “Life is brief, and then you die, you know?”

Don’t chase after what you missed.  Instead, figure out what the next big thing.

Steve says, “If I were running Apple, I would milk the Macintosh for all it’s worth — and get busy on the next great thing. The PC wars are over. Done. Microsoft won a long time ago.”

You can’t arbitrate your way into a great design.  Take it from Jobs, “It’s really hard to design products by focus groups.

A lot of times, people don’t know what they want until you show it to them.”

5. Design is more than veneer.

Design is a multi-layered thing.  It’s a lot more than just veneer.  Steve says, “In most people’s vocabularies, design means veneer. It’s interior decorating. It’s the fabric of the curtains and the sofa.”

But to me, nothing could be further from the meaning of design.

Design is the fundamental soul of a human-made creation that ends up expressing itself in successive outer layers of the product or service.”

Live YOUR life.  Steve says, “Your time is limited, so don’t waste it living someone else’s life.

Don’t be trapped by dogma – which is living with the results of other people’s thinking.

Don’t let the noise of other’s opinions drown out your own inner voice. And most important, have the courage to follow your heart and intuition. They somehow already know what you truly want to become. Everything else is secondary.”

7. Drive to do great things.

It’s your ambition, passion, and drive that will take you places you never dreamed possible.

Don’t worry about impressing others.  Impress yourself.

8. Excellence is a way of life.

Steve finds the art in life and the beauty in engineering.  He sets a higher bar.

Steve says, “Be a yardstick of quality. Some people aren’t used to an environment where excellence is expected.”

Jobs also says, “We don’t get a chance to do that many things, and every one should be really excellent. Because this is our life.”

9. Get out of the way for the moving force.

The ones doing the work are the moving force.  Get out of their way.

Steve says, “The people who are doing the work are the moving force behind the Macintosh. My job is to create a space for them, to clear out the rest of the organization and keep it at bay.”

10. If they fall in love with the company, everything else takes care of itself.

The real secret to taking care of the company is hiring people that fall in love with the company.

Steve says, “When I hire somebody really senior, competence is the ante. They have to be really smart.

But the real issue for me is, are they going to fall in love with Apple?

If you’re going to put your life force into it, then the journey has to be worth it.

Steve says, “And we’ve all chosen to do this with our lives. So it better be damn good. It better be worth it.”

Jobs also says, “Being the richest man in the cemetery doesn’t matter to me … Going to bed at night saying we’ve done something wonderful… that’s what matters to me.”

13. It’s the crazy ones who change the world.

Think differently.  Don’t be afraid to be different.

It’s the crazy ones who change the world.

But it’s not crazy, it’s genius.

While the words are from Apple’s “Think Different” ad campaign, people usually associate them with Steve Jobs because of how he embraced the crazy ones.

14. Innovation distinguishes between a leader and a follower.

You don’t buy your way through innovation.  Innovation is a by-product of leading great people.

Steve says, “Innovation has nothing to do with how many R&D dollars you have.

When Apple came up with the Mac, IBM was spending at least 100 times more on R&D. It’s not about money.

It’s about the people you have, how you’re led, and how much you get it.”

It’s tough love.  Steve says, “My job is to not be easy on people. My job is to make them better.”

What’s the difference between those that succeed and those that don’t?

They stick with it.  They have grit.

Steve says, “I’m convinced that about half of what separates the successful entrepreneurs from the non-successful ones is pure perseverance.”

Don’t just go through the motions.  If it’s really worth doing, then it’s worth doing really well.

Steve says, “I think the key thing is that we’re not all terrified at the same time. I mean, we do put our heart and soul into these things.”

Say no to the hundred other good ideas.

Spend your precious life force and resources on your vital few bets — and go big.

Steve says, “People think focus means saying yes to the thing you’ve got to focus on. But that’s not what it means at all. It means saying no to the hundred other good ideas that there are. You have to pick carefully.”

Steve says, ““We’ve gone through the operating system and looked at everything and asked how can we simplify this and make it more powerful at the same time.”

20. Talent is a huge multiplier.

In the book, The Steve Jobs Way: iLeadership for a New Generation, Jay Elliot and William Simon write that Steve Jobs would say, “great engineers are a huge multiplier.”

They also write that a lesson they learned from Steve is, “One of the greatest things about finding good people is that they become your best recruiters. They are the people most likely to know others who have the same values and sense of style that you and they themselves do.”

Don’t take a piecemeal approach to user experience.  It’s not about a bunch of beautiful parts …it’s about the end-to-end experience.

Steve says, “Our DNA is as a consumer company – for that individual customer who’s voting thumbs up or thumbs down. That’s who we think about. And we think that our job is to take responsibility for the complete user experience. And if it’s not up to par, it’s our fault, plain and simply.”

22. What you don’t do defines you as much as what you do.

Part of your greatness will come from what you choose not to do.

In the article, “Think Different”: The Ad Campaign that Restored Apple’s Reputation, Tom Hormby writes, “Amelio had reduced 350 projects to 50, and Jobs cut that number down to 10. He turned Apple’s convoluted (and often overlapping) product line into a simple product matrix.”

Follow your heart.   Avoid the trap of thinking you have something to lose.

Steve says, “Almost everything–all external expectations, all pride, all fear of embarrassment or failure–these things just fall away in the face of death, leaving only what is truly important. Remembering that you are going to die is the best way I know to avoid the trap of thinking you have something to lose. You are already naked. There is no reason not to follow your heart.”

24. You just might be right, even if nobody listens to you.

Just because nobody listens to you doesn’t mean you’re wrong.

Steve says, “You know, I’ve got a plan that could rescue Apple. I can’t say any more than that it’s the perfect product and the perfect strategy for Apple. But nobody there will listen to me.”

25. Your brand is your most valuable asset.

It’s what you stand for.  It’s the attributes that people think of or feel when they think of you.

It’s the perception and the aura.  Steve says, “Our brand is the most – or at least one of the most – valuable things we have going for us now.”

Steve Jobs is often associated with quotes from the free-verse poem, Heres’ to the Crazy Ones, by Craig Tanimoto.

The poem was narrated by Richard Dreyfus as part of an ad campaign to revive Apple’s reputation.

“Here’s to the crazy ones. The misfits. The rebels. The troublemakers. The round pegs in the square holes.

The ones who see things differently. They’re not fond of rules. And they have no respect for the status quo. You can quote them, disagree with them, glorify or vilify them.

About the only thing you can’t do is ignore them. Because they change things. They invent. They imagine. They heal. They explore. They create. They inspire. They push the human race forward.

Maybe they have to be crazy.

How else can you stare at an empty canvas and see a work of art? Or sit in silence and hear a song that’s never been written? Or gaze at a red planet and see a laboratory on wheels?

We make tools for these kinds of people.”