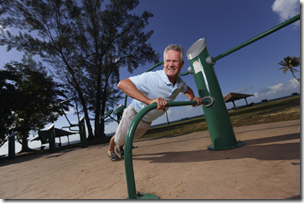 What do people that exercise hard 6 days a week have that others don’t?

An extraordinary level of strength, optimism, and flexibility to renew their body and handle whatever comes their way.

But there’s more than that.

In Younger Next Year: Live Strong, Fit, and Sexy – Until You’re 80 and Beyond, Dr. Henry Lodge and Chris Crowley share how exercising hard 6 days a week changes you in every way.

Get Functionally Younger Every Year

According to Dr. Henry Lodge and Chris Crowley, exercising hard 6 days a week puts off 70% of the normal problems of aging – weakness, sore joints, bad balance – and eliminates 50% of serious illness and injury.

It’s also part of the formula for becoming functionally younger every year, and continue to live with new found vitality and pleasure.

Exercise is the real deal when it comes to the fountain of youth, and you get to control it.

But how do you exercise hard six days a week?

You make it your job.

Don’t ease into it.   Make a sharp break with your past.  Don’t let your past control your future.

Get serious about exercise.

Exercise is your best defense against aging, and your best source of renewal, and the best way to revitalize your mind and body.

“We urge you not to start gradually.  It is far better to make a sharp break with the past and a serious commitment to the future.  If you are at or near retirement, we urge you as strongly as we can to make this your new job.

If retirement is a ways off, think of it as your first priority after work and do the best you can.  But remember, as you get older, steady exercise rises on the priority list because the tide is rising.  The tide has its priorities, and you must have yours.  Or you’ll be swept away.”

If you’ve ever worked for a living, you’ve learned something powerful you can use to learn how to exercise.  You’ve learned to how to show up and get to work.

“There is one thing people learn in their careers, whether they’re president of the company or mid-level what-do-you-call-its.  They learn to go to work.  Without thinking much about it, they learn a skill that children and heiresses do not have.

They learn to go to work every day and do their job.

That simple knack is one of the most powerful organizing forces in life, and you have it, etched deep in your conscious and unconscious mind.  Nice going.  Now use it in your new life.”

The Go-To-Work Habit is a Great Prioritizer

Love it or hate it, the Go-To-Work Habit is a powerful way to prioritize what you’ll do in your day.

Younger Next Year: Live Strong, Fit, and Sexy – Until You’re 80 and Beyond:

“One of the terrific things about the go-to-work habit is that it’s a great prioritizer.  Work trumps everything except serious illness or serious family problems.  Daily exercise should be treated the same way.  If you’re going to have success with this excellent new life, you’re going to have to give regular exercise that priority.  Which may be hard. “

Exercise is the most important thing you can do to change your vitality.

“Some people have trouble thinking that exercise is ‘serious.’  They feel vaguely guilty about it, because it’s too much like play.  All we can say is, get over it, because that’s nuts.

Nothing you are doing in the Next Third is as important as daily exercise.

If it feels like play, great: you’re one of the lucky one’s.  But it is deadly serious, because it is keeping you from becoming a pathetic old fool.  You think there’s something more important than that? Come on!”

You Are Your Own Gym

How 30-Minutes of Exercise is More Effective than Longer Workouts
Next Post:Write Down 3 Things Each Day to Live Longer and Stronger