No Person (10 Types of Difficult People) 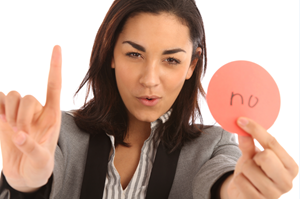 “Life is a shipwreck but we must not forget to sing in the lifeboats.” — Voltaire

A No Person kills momentum and creates friction for you.

More deadly to morale than a speeding bullet, more powerful than hope, able to defeat big ideas with a single syllable.

Disguised as a mild mannered normal person, the No Person fights a never ending battle for futility, hopeless ness, and despair.

In Dealing with People You Can’t Stand: How to Bring Out the Best in People at Their Worst, Dr. Rick Brinkman and Dr. Rick Kirschner write about dealing with people that behave like a No Person.

Your Goal with a No Person

You goal in dealing with a No Person is to transition to problem solving.

“When dealing with a No Person, your goal is to move from fault finding toward problem solving, from stagnation toward innovation, from decline toward improvement. You may not stop the flood of negativity completely, but you can succeed in turning the tide back to its proper course.”

Action Plan for Dealing with a No Person

Brinkman and Kirschner provide prescriptive guidance for dealing with a No Person:

I’ve dealt with multiple No People and it’s usually a matter of allowing more time and changing the approach. Asking the right questions and presenting the right arguments helps a lot. Mostly it comes down to understanding their concerns and knowing their values.