Personal Leadership is a Choice 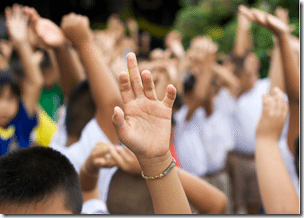 “It is a fine thing to have ability, but the ability to discover ability in others is the true test.” — Elbert Hubbard

Don’t give your power away.  You don’t need somebody to give you a title to practice your leadership.  Leadership is influence.  Your build your influence muscle the more you practice it.

I was looking tor more nuggets of wisdom from Stephen Covey, and I found this one on the downward spiral of codependency.  It happens when managers or leaders treat people like things.  And it happens when you let yourself be managed like a thing.

Don’t Wait to Be Told What To Do

As a leader of people, the last thing you want is everybody waiting to be told what to do.   If all the reward, or all the blame is on your shoulders, then you’ve created a disempowering and codependent environment.  As an individual, the last thing you want is to be continuously looking outside yourself, waiting for answers and solutions to appear, or for somebody else to fix whatever the problem is.

Don’t let YOU stop YOU from taking initiative, and don’t be the one that takes your power away.

In the book, The 8th Habit: From Effectiveness to Greatness, Stephen Covey shares insights and actions on how to break the chain of codependency and to rise above your position through self-leadership and by looking inside, not outside to take initiative.

Leadership is Not a Position

You don’t need a position to exercise your leadership.

“What happens when you manage people like things?  They stop believing that leadership can become a choice.  Most people think of leadership as a position and therefore don’t see themselves as leaders.  Making personal leadership (influence) a choice is like having the freedom to play the piano.  It is freedom that has to be earned — only then can leadership become a choice.”

If you’re waiting to be told what to do, you are not exercising your personal leadership.

“Until then, people think that only those in position of authority should decide what must be done.  They have consented, perhaps unconsciously, to being controlled like a thing.  Even if they perceive a need, they don’t take the initiative to act.  They wait to be told what to do by the person with the formal title, and then they respond as directed.  Consequently, they blame the formal leader when things go wrong and give him or her the credit when things go well.  And they are thanked for their ‘cooperation and support.’”

You Don’t Need Others to Change

You don’t need others to change, to change your circumstances.  Change yourself first.

“This widespread reluctance to take initiative, to act independently, only fuels formal leaders’ imperative to direct or manage their subordinates.  This, they believe is what they must do in order to get followers to act.  And this cycle quickly escalates into codependency.  Each part’s weakness reinforces and ultimately justifies the other’s behavior.

The more a manager controls, the more he/she evokes the behaviors that necessitate greater control or managing.  The codependent culture that develops is eventually institutionalized to the point that no one takes responsibility.  Over time, both leaders and followers confirm their roles in an unconscious pact.  They disempower themselves by believing that others must change before their own circumstances can improve.  The same cycle reappears in families between parents and children.”

Look Inside, Not Outside

Our nature is to look outside, but we need to first look within.

“The silent conspiracy is everywhere.  Not many people are brave enough to even recognize it in themselves.  Whenever they hear the idea, they instinctively look outside themselves.  When I teach this material to large audiences, I often pause after a couple of hours and ask the question, ‘How many like this material, but feel that the people who really need it, aren’t here?’  They usually explode in laughter, but most hands go up.

Perhaps you, too, are thinking that people who really need a book like this aren’t reading it.  That very thought reveals codependency.  If you look at this material through the weaknesses of another, you disempower yourself and empower their weaknesses to continue to suck initiative, energy, and excitement from your life.”

What can you do about it?

Stephen Covey on the Age of Wisdom

I Get By With a Little Help from My Friends
Next Post:How To Develop Emotional Intelligence with the 7 Habits