Shut Down, Compartmentalize, or Channelize (What We Do When We’re Overwhelmed) 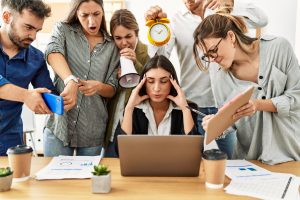 What do we do when we get overwhelmed?

We we’re up to our neck in stuff, or worse, in over our head, we shut down, compartmentalize, or we channelize.

Yet this simple pattern can affect us at home or on the job.

In the book, Flawless Execution: Use the Techniques and Systems of America’s Fighter Pilots to Perform at Your Peak and Win the Battles of the Business World, James Murphy writes about shutting down, compartmentalizing, and channelizing.

Shutting down means giving up.

“You quit.  You stop performing.

… Shutting down is the most harmless of coping mechanisms.

When you leave your desk or amble around the office, people at least know that you’re not executing your mission, you’re not on task.”

“Compartmentalizers and channelizers, on the other hand, are risky people because they act busy but do little and kill you while you’re at it. …

Compartmentalizers start making lists, organizing their projects, and shuffling things around as if the list making and shuffling are akin to doing the work, which they are not.

Then they start going top to bottom, ticking one item off another.

They become obsessively linear, first-things first, one project at a time.”

Channelizers put the blinders on and focus on one thing at the expense of others.

“Then there are those who channelize.

Either percent of people who succumb to task saturation cope with it by channelizing or becoming intensely focused on just one thing.

Some people call this ‘target fixation.’ “

The keys to avoiding task saturation are using routines, writing things down, using checklists, and having buffers for the unexpected.

For a simple system that puts this together, see Getting Results the Agile Way.

3 Keys to The Good Life
Next Post:Information Overload is Not the Problem, It’s Filter Failure