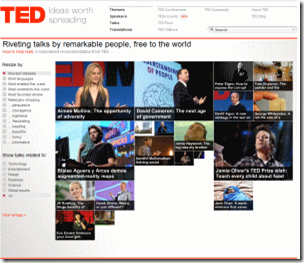 “Life is a big canvas, throw all the paint on it you can.” — Danny Kaye

The Web is a fountain of knowledge, especially if you know where to drink from.  This post is a quick tour of some of the main sites I use that make me think.

Here are 10 sites that make me think and inspire new ideas:

Here is a quick sampling of some of the interesting talks and life changing ideas:

What are your favorite sources of insight and inspiration on the Web?