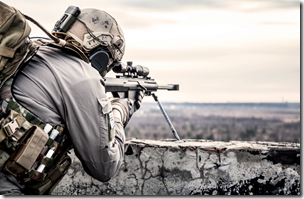 “One’s dignity may be assaulted, vandalized and cruelly mocked, but it can never be taken away unless it is surrendered.” — Michael J. Fox

They use rude comments, biting sarcasm, or a well-timed roll of the eyes.

Making you look foolish is the Sniper’s specialty.

Snipers take shots at you to make you look bad or to try to undermine you.

In Dealing with People You Can’t Stand: How to Bring Out the Best in People at Their Worst, Dr. Rick Brinkman and Dr. Rick Kirschner write about how to deal with people that behave like a Sniper.

You Goal in Dealing with a Sniper Person

You goal with a Sniper is to bring them out of hiding.
Via Dealing with People You Can’t Stand:

“Your goal when dealing with a Sniper is to bring the Sniper out of hiding. Whatever type of Sniper you face, whether the playful snipe, the controlling snipe, or the grudge snipe, you only need remember this:

A Sniper can’t snipe if there’s nowhere to hide.

Since the Sniper’s limited power is derived from covert, not overt, activity, once you have exposed her position, that position becomes useless.

Be dealing directly and assertively with Sniper Behavior, you take the fun out of it for her, and even the odds by forcing her out of her hiding place and onto common ground.”

Action Plan for Dealing with a Sniper Person

Brinkman and Kirschner provide prescriptive guidance for dealing with Snipers:

Examples of Responding to a Sniper Person

Brinkman and Kirschner provide examples of responding to Snipers:

Don’t be paranoid of Snipers.