Social Loafing: More is Less When It Comes to Work 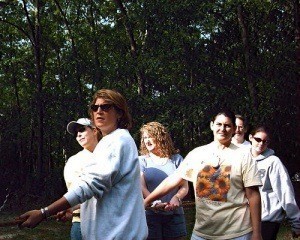 Except when they don’t.

Is there really strength in numbers?

Not according to social loafing.  The more people there are, the less hard they work.

People are Apt to Work Less Hard in Groups

“Bibb Latane (1981) suggests that these results are indicative of a phenomenon known as social loafing.  Social loafing occurs during a shared group activity when there is a decrease in individual effort due to the social pressure of other persons.

It happens because social pressure to perform is, in a sense, dissipated by the presence of others; an individual feels as if the pressure is shared by the other people.  Hence, people are apt to work less hard in groups due to the perception of reduced social pressure to produce.”

Feldman writes that the more people there are, the less hard they pull.

“The results were unequivocal: the more people pulling, the less hard the average individual pulled.  When alone, the subjects averaged a pulling strength of 63 kilograms, but this average fell to 53 kilograms with two co-pullers and only 31 kilograms per person with groups of eight.”

Why Does Social Loafing Occur

According to Feldman, there’s a few reasons why social loafing occurs.

How to Combat Social Loafing

How do you reduce the possibility of social loafing in collective situations?    Feldman writes that you need to make individuals feel responsible for the group’s performance.

“The most obvious solution is to structure group situations so that reach group member feels personally responsible for the outcomes of the group as a whole.

One specific technique would be to promote group norms that emphasize the individual’s contribution to group performance.”

More is less when there is Social Loafing in action.

Volunteer Your Strengths to the Team

How To Consistently Build a Winning Team