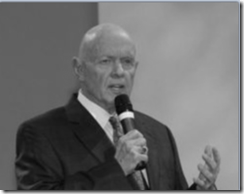 Stephen Covey passed away yesterday, July 16th, 2012.  He was 79. The legacy of Stephen Covey will live on.  His ideas have shaped leadership, management, and personal development in profound ways.

Covey’s legacy will live on through the books he’s written, the knowledge he has shared with the world, and the lives he has impacted.

I remember the day my Dad said I just had to listen to Stephen Covey.  He was all excited about the idea of principles as a way to guide your life.  My Dad told me, briefly, that rather than any gimmicks or techniques, Stephen Covey used simple habits to help you change what you’re getting in life.  My Dad gave me an example with, “Seek First to Understand, Then to Be Understood.”  I didn’t really get it, but I was intrigued.

Since my Dad had previously told me to listen to Tony Robbins, I was curious who this new hero was.  (Aside — listening to Tony Robbins helped me go from #4 from the bottom in a class of 297 to #3 at the top, so I was a fan.)

Anyway, I remember listening to Stephen Covey’s 7 Habits of Highly Effective People.  I was spell-bound.  I remember his words making so much sense.

His voice had passion and enthusiasm, but it was very down to Earth.  He was like a masterful bard plucking truths from the universe, and sharing them one-on-one as a friend.

At work, I practiced the habits.

The mash up of the habits was more like a mindset.  I liked dreaming up the “End in Mind”.  I liked to “Be Proactive.” I drove from an abundance mentality and always looked for the “Win-Win”.  I embraced the idea of “Seek First to Understand” so much that I would often forget whatever I had planned to say.  I relentlessly prioritized to “Put First Things First.”

I found synergy and ways to “Synergize” in the work that people already did, by simply connecting dots, lining things up, and leveraging existing workflows.  And my favorite habit was “Sharpen the Saw.”

I had a passion for learning and I knew that the only way to keep up or get ahead, would be to invest in myself for the long haul.

Stephen Covey Taught Us to Focus on Principles (vs. Rules)

In Principle-Centered Leadership, I also learned the distinction between “rules” and “principles.”  With rules, you needed an answer for every situation (“We have a rule for this” or “We have a policy for that.”)

With principles, you established a small set of principles that serve as a guide for choices and behavior, much in the same way that strategy guides tactics.  The beauty of principles is that they help people stay flexible and creative in resolving problems.  Also, rather than just sticking to way things have always been done, principles help people focus on objectives and what they are trying to achieve.  It’s focusing on “the spirit of the law” vs. “the letter of the law.”

My leadership approach at work is very much principle-centered.  I put a strong focus on empowerment, and lifting others up.  I like to see people grow their greatness.  Speaking of which …

The 8th Habit: From Effectiveness to Greatness, blew me away.  Stephen Covey’s 8th Habit is:

“Find your voice and inspire others to find theirs.”

How perfect is that?

I make it a mission at work to help folks find their unique combination of strengths and to give their best where they have their best to give.

Stephen Covey Taught Us to Think About the Whole Person

I was lucky enough to meet Stephen Covey a few years back when he spoke at Microsoft.  I was awe-struck by his presence.  He had a tone, a cadence, and a passion in his voice that was well beyond what you run into day to day.  It was a highlight for me in so many ways, and I found myself learning many new insights, and revisiting old ones.

I learned empathic listening at a deeper level.  For the first time, it really stuck.  Rather than listen until you think you heard someone, you listen until “they feel they’ve been heard.”  Big difference.  I learned to think way more deeply about the impact of shifting from industrial age work to the knowledge worker age.

I learned how to think about the whole person.

Overall, it was a day of deep learning and deep reflection.  (Note — If you want a deeper dive into what I learned from that session, you can read my lessons learned from Stephen Covey.)

Yes, Stephen Covey leaves us.  But it’s not that he leaves us, it’s what he’s left behind.  It’s what he created during this life time.  He leaves a lasting legacy that has forever shaped ideas around how we invest our time, focus on what’s important, empower people, and lift each other up.

Success Defined: Stephen Covey on What is Success

The Real Rules of Life Book Summary
Next Post:150,000 Unique Visitors for the Month