Stephen Covey on How To Present More Effectively 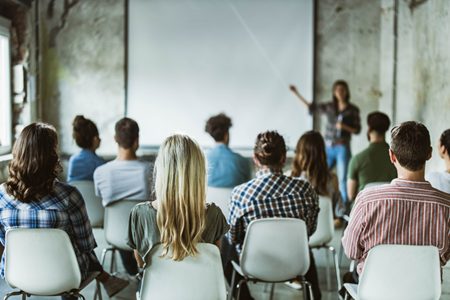 “If the speaker sends a message that the receiver does not understand – then who needs to change?” –Unknown

What if you could present your idea in a way that people get it and they want to use or implement your idea?

Or what if you could get the funding or for support or for resources that you ask for?

When people don’t get your idea or don’t give you what you want or don’t do what you ask, it’s easy to blame them, or simply say they just don’t get it.

A more effective approach is to change your approach.

Stephen Covey found the secret to improving your effectiveness when you present your ideas is Habit 5—Seek First to Understand, Then to Be Understood.

In The 7 Habits of Highly Effective People, Covey shares a way to significantly improve your effectiveness in your presentations and when you present your ideas.

The Greeks Had it Right: Ethos, Pathos, Logos

If people don’t get you, or you don’t get them, you’ll have a hard time influencing anybody.

If you’re trying to win somebody over with all your arguments and logic, chances are you’ve lost them already.

According to the Greeks, you have to start with trust and credibility.   From there, you need to connect emotionally.  Lastly, you can use logic to move people forward.

“The early Greeks had a magnificent philosophy which is embodied in three sequentially arranged words: ethos, pathos, and logos.  I suggest these three words contain the essence of seeking first to understand and making effective presentations.

Ethos is your personal credibility, the faith people have in your integrity and competency.  It’s the rust that you inspire, your Emotional Bank Account.  Pathos is the empathic side–it’s the feeling.  It means that you are in alignment with the emotional thrust of another person’s communication.  Logos is the logic, the reasoning part of the presentation.

Notice the sequence: ethos, pathos, logos–your character, and your relationships, and then the logic of your presentation.  This represents another major paradigm shift.  most people, in making presentations, go straight to the logos, the left brain logic, of their ideas.  They try to convince other people of their validity of that logic without first taking ethos and pathos into consideration.”

Story #1: The Employee Who Couldn’t Change his Boss’s Leadership Style

What if you want to change your boss, but your boss won’t change?

You could change yourself – and that’s the key to changing your boss.

But most people won’t or don’t change themselves.  They’d rather everybody else did.

And that’s why they stay stuck.

Here is a story that Stephen Covey shares about an employee who didn’t change, and so they stayed stuck.

“I had an acquaintance who was very frustrated because his boss was locked into what he felt was an unproductive leadership style.
‘Why doesn’t’ he do anything?’ he asked me.  ‘I’ve talked to him about it, he’s aware of it, but he does nothing.’
‘Well, why don’t you make an effective presentation?’ I asked.
‘I did,’ was the reply.
‘How do you define *effective*?   who do they send back to school when the salesman doesn’t sell–the buyer? Effective means it works; it means P/PC. Did you create the change you wanted? Did you build the relationship in the process? What were the results of your presentation?’
‘I told you, he didn’t’ do anything.  He wouldn’t listen.’
‘Then make an effective presentation.  You’ve got to empathize with his head. You’ve got to get into his frame of mind.  You’ve got to make your point simply and visually and describe the alternative his in favor of better than he can himself.  That will take some homework.  Are you willing to do that?’
‘Why do I have to go through all that?’ he asked.
‘In other words, you want him to change his whole leadership style and you’re not willing to change your method of presentation?’
‘I guess so,’ he replied.
‘Well, then,’ I said, ‘just smile about it and learn to live with it.’
‘I can’t live with it,’ he said.  ‘It compromises my integrity.’
‘Okay, then get to work on an effective presentation.  That’s in your Circle of Influence.’
In the end, he wouldn’t do it.  The investment seemed to great.”

Story #2: The Professor Who Got his Research Funding

Do you have a bunch of great ideas, but nobody wants to follow you, or help you, or fund you, or staff you, or support you?

Here’s Stephen Covey on how one maverick professor with non-mainstream ideas changed his approach to get the funding he needed.

“Another acquaintance, a university professor was willing to pay the price.  He approached me one day and said, ‘Stephen, I can’t get to first base in getting the funding I need for my research because my research is really not in the mainstream of the department’s interests.’

After discussing his situation at some length, I suggested that he develop an effective presentation using ethos, pathos, and logos.  ‘I know you’re sincere and the research you want to do would bring great benefits.  Describe the alternative that they are in favor of better than they can themselves.  Show that you understand them in depth.  Then carefully explain the logic behind your request.’
‘Well, I’ll try,’ he said.
‘Do you want to practice with me?’ I asked.  He was willing, and so we dress rehearsed his approach.
When he went in to make his presentation, he started by saying, ‘Now let me see if I first understand what your objectives are, and what your concerns are about this presentation and my recommendation.’
He took the time to do it slowly, gradually.  In the middle of his presentation, demonstrating his depth of understand and respect for their point of view, a senior professor turned to another professor, nodded, turned back to him, and said, ‘You’ve got your money.’”

If you’re ranting or raving, but you haven’t demonstrated depth and understanding of your audience’s pains, needs, and desired outcomes, then you’re doing it wrong.

“When you can present your own ideas clearly, specifically, visually, and most important, contextually–in the context of a deep understanding of their paradigms and concerns–you significantly increase the credibility of your ideas.
You’re not wrapped up in your ‘own thing,’ delivering grandiose rhetoric from a soapbox.  You really understand.  What you’re presenting may even be different from what you had originally thought because in your effort to understand, you learned.”

Habit 5 Lifts You to Greater Accuracy and Greater Integrity

Accuracy and integrity are your friends when it comes to improving your influence and impact.

“Habit 5 lifts you to greater accuracy, greater integrity, in your presentations.  And people know that.  They know you’re presenting the idea which you genuinely believe, taking all known facts and perceptions into consideration, that will benefit everyone.”

Don’t be surprised if people don’t want to listen to your rant or your rave if you haven’t first connected with them around their pains, needs, and desired outcomes.

And if you think something in the world or at work is wrong, or that other people need to change, then do yourself a favor and first change yourself.

10 Big Ideas from The 7 Habits of Highly Effective People
Next Post: Jim Rohn on The Power of Ideas