The Power of Superordinate Goals: How To Reduce Conflict Between Groups 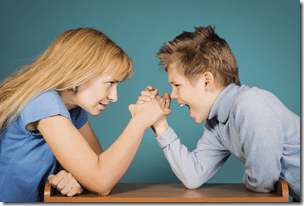 “Out beyond ideas of wrong doing and right doing, there is a field. I’ll meet you there.” – Rumi

How do you get competitive groups to work with each other?

How do you improve cross-group collaboration?

In Robber’s Cave, a famous experiment on how goals shape group formation, experimenters created two groups.  To create two groups, each group performed activities that could only be performed by group effort.
Via Social Psychology:

“One of the best examples of how group goals can influence group formation comes from a now-classic field study held in a boy’s summer camp named Robber’s Cave (Sherif, 1966).

Two groups of middle-class 11- and 12-year-olds – none of whom knew that he was in an experiment – were settled in opposite sides of the camp. Each group was unaware of the other group’s existence.

To develop the two campsites into groups, the experimenters arranged for the boys to engage in activities that could only be carried out by group efforts, such as carrying a heavy canoe into the water or cleaning a dirty beach so that it was suitable for
use.

Quite soon, each campsite evolved into what could clearly be called a group. They gave themselves names (the “Rattlers” and the “Eagles”) and they developed particular patterns and standards of behavior unique to each group.”

What happens when two groups compete for prizes and only one group can win?  As you might expect, you may see wicked, disturbed, and vicious behavior.

“Once the two groups had been established, the experiments tried to develop competition.

To do this, they developed a tournament of games in which the two groups competed for a series of prizes that only one group could win.

The researchers got more than they bargained for beyond the tournament. The groups picked fights, raided each other’s campsites, and generally behaved in a manner that lead the researchers to feel that, to an outside observer, the children appeared as ‘wicked, disturbed, and vicious bunches of youngsters’ (Sherif, 1966, p. 58). “

If you want to bring groups together, setting up fun experiences together might not work.  Preaching won’t work, either.  And, neither will creating a common enemy.

The strategy that actually works is creating goals across the groups, where they work together to achieve the goals.

“In an attempt to reduce the intergroup conflict, the experimenters at first tried a number of strategies that proved ineffective. Arranging for pleasant experiences, such as watching a movie, only provoked more fighting as soon as the lights were dimmed.

Moral exhortation proved useless. Even the introduction of a third group, which was supposed to act as a kind of common enemy, was ineffective.

This time, they were right. ”

Crisis Brings the Groups Together

You can bring people together through shares goals, especially when there is a sense of urgency, or an emergency.

“The experimenters arranged for a series of emergencies. For instance, the water supply broke down, and the boys had to work jointly if they wanted to have water to drink.

After a number of such events, group hostility was eventually reduced, friendships developed across group lines, and the superordinate goals became effective in unifying the previously hostile groups.”

I think we’ve all seen crisis bring folks together.

The key is taking away the concern that only one group can win.  It creates a scarcity mentality.  The key is to unite the groups is to create a scenario in which, together the groups can win.

At work I often run into groups competing against each other for limited resources or territory. Common goals are a higher level bring groups together.

When that’s not possible, it’s important to take away the threat, to reduce cross-group hostility. One way to do this, if the space is large enough, is to carve out a niche, to reduce the turf wars.

Everybody gets a place to play and they respect each other’s boundaries.