The Fat Guy and The Skinny Guy 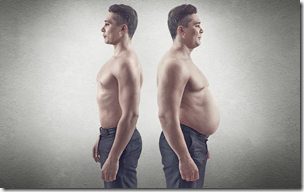 “The words ‘I am’ are potent words; be careful what you hitch them to. The thing you’re claiming has a way of reaching back and claiming you.” — A.L. Kitselman

We each have competing personalities within us.

The challenge in life is to align these competing personalities so we find our own congruence.

In The E-Myth Revisited: Why Most Small Businesses Don’t Work and What to Do About It, Michael E. Gerber, writes about how each of us has different personalities inside and how they can work against us.

Every One of Us is a Set of Different Personalities

We all have multiple personalities (and, as a result multiple possibilities) within us.

“Is it any wonder we have such a tough time keeping our commitments to ourselves?

It’s not that we’re indecisive or unreliable; it’s that each and every one of us is a whole set of different personalities, each with his own interests and way of doing things. Asking any of them to defer to any of the others is inviting a battle or even a full-scale ware.

Anyone who has every experienced the conflict between The Fat Guy and The Skinny Guy (and haven’t we all?) knows what I mean. You can’t be both; one of them has to lose. And they both know it.”

The Skinny Guy Wakes Up

“Let’s take a look at two personalities we’re all familiar with: The Fat Guy and The Skinny Guy

Have you ever decided to go on a diet? You’re sitting in front of the television set on Saturday afternoon, watching an athletic competition, awed by the athletes’ stamina and dexterity. You’re eating a sandwich, your second since you sat down to watch the event two hours before.

You’re feeling sluggish in the face of all the action on the screen, when, suddenly, somebody wakes up in you and says, ‘What are you doing? Look at yourself, You’re Fat! You’re out of shape! Do something about it!’”

The Skinny Guy Calls the Shots

When The Skinny Guy takes over, he has a different picture of who we should be and how we should live.

“It has happened to us all. Somebody wakes up inside us with a totally different picture of who we should be and what we should be doing. In this case, let’s call him The Skinny Guy.

Who’s The Skinny Guy? He’s the one who uses words like discipline, exercise, organization. The Skinny Guy is intolerant, self-righteous, a stickler for detail, a compulsive tyrant.  The Skinny Guy abhors fat people. Can’t stand sitting around. Needs to be on the move. Lives for action.  The Skinny Guy has just taken over. Watch out — things are about to change.”

The World’s a Different Place

The world changes right before your eyes, as The Skinny Guy starts putting plans to work and making things happen.

“Before you know it, you’re cleaning all the fattening foods out of the refrigerator. You’re buying a new pair of running shoes, barbells, and sweats.

Things are going to be different around here.

You have a new lease on life. You plan your new physical regimen: up at five, run three miles, cold shower at six, a breakfast of wheat toast, black coffee, and half a grapefruit; then, ride your bicycle to work, home by seven, run another two miles, to bet at ten — the world’s already a different place!”

The Skinny Guy Gets Results

The Skinny Guy gets results and the results build momentum.

“And you actually pull it off! By Monday night, you’ve lost two pounds. You go to sleep dreaming of winning the Boston Marathon. Why not? The way things are going, it’s only a matter of time.

Tuesday night you get on the scale. Another pound gone! You’re incredible. Gorgeous. A lean machine.”

But then dejection happens.  You stop making progress the way you expect.

“On Wednesday, you really pour it one. You work out an extra hour in the norming, an extra half-hour at night.

You can’t wait to get on the scale. You strip down to your bare skin, shivering in the bathroom, fill with expectation of what your scale is going to tell you. You step lightly onto it and look down. What you see is … nothing. You haven’t lost an ounce. You’re exactly the same as you were on Tuesday.

Dejection creeps in. You begin to feel a slight twinge of resentment. “After all that work? After all that sweat and effort? And then — nothing?” It isn’t fair.” But you shrug it off. After all, tomorrow’s another day. You go to bed, vowing to work harder on Thursday. But somehow something has changed.”

The Fat Guy’s Back

When dejection creeps in, you feel a change.  It’s The Fat Guy.  He’s back.

It’s raining.
The room is cold.
Something feels different.
What is it?
For a minute or two you can’t quite put your finger on on it.
And then you get it: somebody else is in your body.

Our personalities form the team inside us.

Here are a few of my take aways:

I found Gerber’s frame and story both entertaining and insightful. It reminds me of the cartoons where a devil and angel sit on each shoulder, each one fighting for control.

Previous Post:Expectation Management
Next Post:How the Entrepreneur, the Manager, and the Technician Compete Inside Us