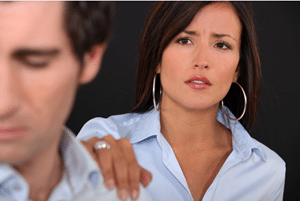 “The successful person has unusual skill at dealing with conflict and ensuring the best outcome for all.” — Sun Tzu

Conflict management gets a whole lot easier when you know what you’re dealing with.  The problem is, if you don’t have a simple mental model for conflict, things can get complicated fast.

The Iceberg of Conflict

According to Chamine, the Iceberg of Conflict has three layers:  Positions, Assumptions, and Aspirations.  You can visualize it like so: 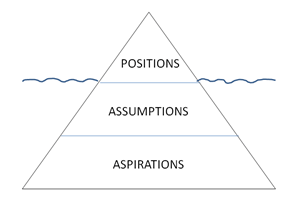 The iceberg metaphor is helpful because it’s often easy to see the position that somebody takes, but not necessarily see the underlying assumptions or aspirations.

For every position there is an opposition.  This is the place where conflict lives.  Chamine writes:

“The problem with positions is that they almost always create automatic opposition; for every position there is an opposite one.  Conflict lives at the position level and is rarely resolved there.  At this level, one part or the other needs to give up its own position entirely, or the two need to meet somewhere in between, which would result in each feeling they had compromised.”

Check your assumptions.   If you start checking your assumptions, you might find you had it all wrong, or that you misread the intentions.  Misreading intentions is a common source of conflict.   Chamine writes:

”People’s positions are often fed by underlying assumptions.  These often include many assumption’s about the other party’s intentions.  Even as an expert in the field, I have been humbled by how difficult it is to correctly guess another person’s needs and intentions.  I have learned that it is critical to check with them, rather than assume.”

Find the common ground at the aspiration level.  Chamine writes:

”The underlying aspirations that feed our positions hold the key to harvesting the gift of conflict.  While it is an automatic human response to opposite another’s rigid position, we react quite differently to aspirations, which are very difficult to argue with.  Each of us is wired to champion other’s deeply felt aspirations.  Consider, for example, how frequently you have automatically rooted for total strangers you’ve read about or watched in a movie who are passionately pursuing an aspiration.  There is a whole lot of common ground between human beings at the aspiration level.”

The next time you find yourself in a conflict, check your assumptions and connect at the aspirations.

Best of the Web (Top Blogs for Insight and Action)
Next Post:10 Reasons for Writing Things Down