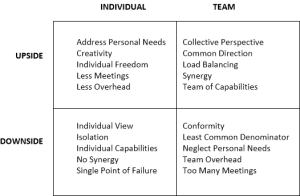 “It is the stretched soul that makes music, and souls are stretched by the pull of opposite bents, tastes, yearnings, loyalties.” — Eric Hoffer

Why is it that some problems never seem to go away?  Maybe they aren’t problems to be solved, but, instead, are dilemmas to be managed.

That’s where the Polarity Framework comes into play.

I was taking a work-life balance workshop, where Bruce Leamon introduced me to the Polarity Framework.

Dr. Barry Johnson developed the method of polarity management as a way to deal with complex problem situations by looking at the whole picture.  The big idea behind the polarity management is that rather than solve a problem and move on, you manage the dilemma.  The dilemma comes from the tension between two ends of the spectrum, or two competing polar opposites, that are interdependent.  With the Polarity Framework, you identify the strengths and weaknesses of the two poles, and then focus on the strengths.

Work-life balance is a great example of a dilemma.  You don’t solve it and it’s done.  Instead, you balance the tension between working and not working, by recognizing the strengths and weaknesses of both, as well as their ups and downs.

Life’s not static.  It’s dynamic.  It’s why the pendulum swings.   It’s this swinging pendulum that creates the dilemma.

You Manage the Dilemma

You solve problems, but you manage the dilemmas you face at work and in life.

Problems are not ongoing things.  They are solvable.  They tend to have alternatives or mutually exclusive options.

Polarities are ongoing.   The polarities need to be managed together to optimize the situation.

If you constantly treat a dilemma like a problem, you’ll frustrate yourself, chasing one problem to the next, and trying to solve things that can’t be solved.  Instead, the best thing you can do is first recognize whether you are solving a problem or operating within a dilemma.

The two keys that determine whether something is appropriate for polarity management are:

It’s the interdependency between the polarities that creates both the challenge and the opportunity.

Focus on the Strengths

The key is to focus on the strengths.

Here is where the magic happens … Rather than focus on the downsides, you focus on the upsides, and you combine them to create a better solution.   If you are a Stephen Covey fan, you can think of this as finding the 3rd alternative.

In this case, you might focus on creating teams that allow for individual creativity and freedom, while getting the power of teamwork to create a common direction, and leverage the collective perspective, synergy, and broader team capabilities.  This is actually a good example of how some highly-effective, self-organizing teams were born.

If you want the best of both worlds, and if you want to better manage conflict, then add the Polarity Framework to your toolbox.  Start recognizing the dilemmas around you, and build on the strengths of each polar opposite.

10 Ways to Live Happily Ever After Now
Next Post:Great Quotes on Personal Development to Live By