How Much Money Do You Really Need to Live Your Dream 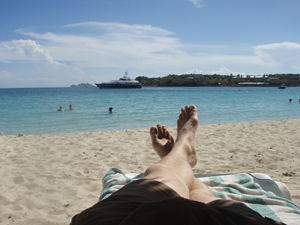 What’s the real price of your dreams?

If you haven’t figured out the actual price of your dreams, then you keep them out of reach.

Your subconscious mind won’t buy in to your dreams if you don’t give it some real numbers or something specific to work with.

And the price of even your wildest dreams might not be as much as you expected.

In the book, MONEY Master the Game: 7 Simple Steps to Financial Freedom, Tony Robbins walks through helping a young entrepreneur translate their dream of living like a billionaire into what their lifestyle might actually cost.

Tony Robbins walks the young Entrepreneur through how owning a private jet would be far more expensive than renting one.

“I started by asking my young friend what his lifestyle would be like if he had a billion dollars.  He thought for a moment and then said, ‘I’d have my own Gulfstream!’
‘Your own jet!’ I sad.  ‘Where will you fly to?’
He said, ‘Well, I live in New York.  I’d probably fly down to the Bahamas.  And I’d probably fly to L.A. for some meetings.’
I had him write down how many times he’d fly in a year, and the figured it was probably a maximum of 12 flights.  And how much would a jet cost him? We looked it up and a long-distance Gulfstream G650 would cost him about $65 million; a slightly used Gulfstream IV would only set him back about $10 million.  Not including fuel, maintenance, and crew.  Then we looked up the cost of chartering a private jet instead of owning one: a midsize jet was all he really needed for himself and three family members to fly, and that’s around $2,500 an hour.  He would be flying for maybe 100 hours a year for a grand total of $250,000 per year, or around $5,000 per hour; or $500,000 if he wanted to fly by Gulfstream on every flight–still far less than the annual price of maintenance on many jets, and at a cost that would be less than 1% of the cost of buying that Gulfstream.  Even from the stage, I could see his eyes lighting up and his mind working.”

Next, Tony Robbins walks through how the young Entrepreneur might be better off renting a private island versus trying to buy one.

“’So what else would you buy with your billion dollars?’ I asked.
‘A private island!’
That was something I could relate to.  I own a small island paradise in the country of Fiji.  It was a wild dream I had in my life to find an escape someday where I could take my family and friends and live.  In my early 20s, I traveled to islands all over the world searching for my Shangri-La.  When I arrived in Fiji, I found it.  A place with not only magnificent beauty but beautiful souls as well.  I couldn’t afford it at the time, but I bought a piece of a little backpacker resort with 125 acres on the island.  I really didn’t have the money, and it probably wasn’t the best investment at first.  But it was part of what I call my Dream Bucket–something you’ll learn about later in this book.  Still, I made it happen, and I’m proud to say that over the years, I’ve purchased and converted it into a protected ecological preserve with over 500 acres of land and nearly three miles of ocean frontage.  I’ve turned Namale Resort and Spa into the number one resort in Fuji for the last decade, and it’s consistently rated among the top ten resorts in the South Pacific.  But how often do I visit this paradise? With my crazy schedule, maybe four to six weeks a year.  So my dream has come true: everybody else has a great time there!

I told my young friend, ‘If you want to enjoy your own island, you might not want to be in the hotel business.  And trust me, you’re only going to be there a few weeks a year at the most.’  We looked up the costs and found out he could buy an island in the Bahamas for $10 or so–and then he would have to spend $30 million to $40 million to build a small resort!  Or he could rent my friend Richard Branson’s Necker Island resort for a week and bring all his friends and family for less than$350,000, with a staff of 50 people to take care of them all.  If he did that every year for a decade, it would only cost $3.5 million versus $30 million to $40 million, with no work to maintain the property.”

After walking through the math, and his wildest dreams, Tony Robbins helped the young Entrepreneur figure out that the actual number he needs to achieve is $10 million, not $1 billion.  And those numbers are worlds apart.

“We worked through his list, and guess how much it would take to have the lifestyle he wants for the rest of his life?  When we added up the real cost of even his wildest dreams, not just his needs, it came to a grand total of no $1 billion, not $500 million, not $100 million, not $50 million, but $10 million to have everything he dreamed of having in his lifestyle and never have to work to pay for it–and his dreams were gigantic!  The difference between $10 million and $1 billion is astronomical.  These numbers exist in different universes.

But back to our would-be billionaire.  Now, don’t get me wrong: $10 million is still a hefty sum but probably within reach for this young entrepreneur over the course of his career.  Who knows? He might actually end up with a billion–if he invents the next instagram.  But what if he doesn’t? He could still live the extraordinary life he was dreaming of for 99% less money than he thought he needed.  He wouldn’t need to be a billionaire to live like one.”

Life is About Emotions, Not Money

What we’re really after is the places, the time, the freedom, and the opportunity.

“I’ll be willing to be that once you find out the real price of your dreams, the number it would take for you to really get where you want to be is a lot less than you think!  And always remember the ultimate truth: life is not about money; it’s about emotion.  The real goal is to have the lifestyle you want, not the things.  When you die, someone else gets those things anyway.  They’re not yours.  I have no illusions: as much as I cherish and enjoy ‘my’ resort in Fuji, I know I’m just the caretaker.  Someday someone else will own this property.  But I love that I have nurtured it into a destination where people from all over the world come to experience joy, romance, and adventure. It’s part of my legacy–and that’s what gives me joy.  Attaining possessions is not the goal.  Money itself is not the goal.  Our worth is not measured by the weight of our bank accounts but, rather, by the weight of our souls.  The path to money, the places money can take us, the time and freedom and opportunity money can bring–these are what we’re really after.”

Whatever your dreams are, even your wildest ones, try breaking them down into some real numbers and some real scenarios.

You might be surprised either how far out of reach you put them, or how accessible you can make them.

And remember that whatever your dream may be, it’s important to know what you’re really after.

It’s easy to spend a lifetime chasing a dream, when what you really wanted is something that you could find or create right under your feet.

Dust Off Your Dreams and Let’s Make Them Happen

The Power of Certainty

The Power of Certainty
Next Post:10 Big Ideas from A Christmas Carol