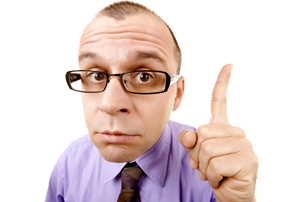 “It is better to keep your mouth closed and let people think you are a fool than to open it and remove all doubt.” — Mark Twain

Think-They-Know-It-All people can’t fool all the people all the time.

They know how to learn just enough about a subject to sound like they know what they are talking about. They are addicted to exaggeration as an attention-getting technique.

They might even suffer from the the Dunning-Kruger effect (dumb people don’t know they’re dumb.)

In Dealing with People You Can’t Stand: How to Bring Out the Best in People at Their Worst, Dr. Rick Brinkman and Dr. Rick Kirschner write about how to deal with people that behave like Think-They-Know-It-Alls.

Your goal in dealing with a difficult person who demonstrates the bad behavior of a Think-They-Know-It-All is to give their bad ideas the hook, and take them off the stage.

“Your goal is to catch them in their act and give their bad ideas the proverbial hook, just as bad acts were removed from the stage in Vaudeville days. Only in this case, you’ll want to do so without putting the Think-They-Know-It-All on the defensive.”

Brinkman and Kirschner provide prescriptive guidance for dealing with Think-They-Know-It-Alls:

Examples of Responding to a Think-They-Know-It-All Person

Brinkman and Kirschner provide examples of dealing with Think-They-Know-It-Alls:

Here are my key takeaaways:

A little attention can go a long way.

The key is to refocus the attention in the right direction.