Why Do We Communicate? 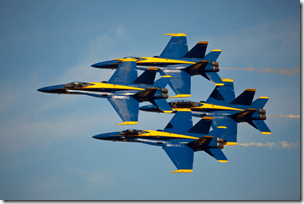 It’s a lazy Summer day.  It’s picture perfect.  The sky is blue.  The Sun is hot.

The golden glow of the Sun gently toasts your skin, or starts to bake it, if you’re out too long.  The cool breeze off the water balances out the heat of the Sun, as it wicks away the sweat from your skin.

The Blue Angels are in town and the weather couldn’t be better.   If you don’t know the Blue Angels, they are the United States Navy’s flight demonstration team.

They are one of the oldest flying acrobatic teams in the world.   When the jets fly by, you feel the awesome power that flies before you.  And you can’t help but smile with admiration when you see the Ninjas of the sky do their thing.

You can also feel the camaraderie, and the buzz that’s in the air.  The way folks say that the Blue Angels are “in town” … it’s as if we’ll be meeting them at Starbucks for coffee.  (Actually, that would be seriously cool.)

I lucked out with finding a place to watch the show.   I perched my Jeep high on a mountain top, with a near perfect view, save one tall and towering Evergreen.   As the start of the Blue Angels show approached, it was a groundswell, of people and cars, all shuffling for pole position.  It was an instant tribe formation.  We all had the same goal in mind – enjoy the Blue Angels as they dance and dart along the sky.

When the Angels get close, it’s a strange silence.  You hear the roar of the jets, but it’s as if time stops and there’s nothing else on your mind, but the moment.  It’s like Peaceful Warrior:

As always, the show was an amazing demonstration of human and machine, both pushing each other to the edge.  As I looked around, I saw that kids and adults alike were paying homage to the Angels with giddy grins and laugh out loud bursts of joy.  The Blue Angels make it OK to be a kid, no matter how old you are.

I also noticed that it was the gathering that made this moment special.

As much as there are many things that are great to experience alone, the power of this one was that it’s a shared experience.

I noticed this when the first person left because they thought the show was over.   Like a herd, plenty more followed.   But the show was far from over.  It was only just beginning.  Shortly after, the Blue Angels launched into their full acrobatic whirls and swirls, and lit the sky with streams of smoke in patterns of skill and excellence at its finest.

A bunch of us were still left, and it felt sort of like a private showing now … from the Angels to us.  In fact, there was one point where the Blue Angels swung by so low and so slow by our mountain top, it was as if to say, “Hello.”  (Luckily, I found a picture that is pretty close to what this looked like — it’s the one above.)

The big thing that I noticed was that there was more buzz when the bigger crowd was around.   That’s when I remembered Tony Robbins’ insight about why we communicate.

We communicate to amplify the feelings.

By sharing this beautiful Summer day with you, I’m hoping to do just that.

Previous Post: « We Change When We Change Our Mental Representation
Next Post: Great Quotes on Change that Will Inspire Your Growth