Why Movies Like Rocky and the Karate Kid Work 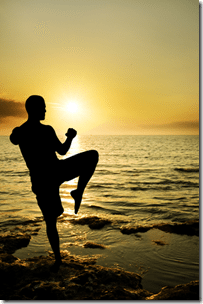 Why do movies like Rocky and Karate Kid help us achieve our dreams?  Because they aren’t just positive fantasies.

Instead, they show it takes hard work and effort to rise above our challenges.  They also show the setbacks that happen along the way.

Rather than hope for the best, or luck into success, movies like Rocky and the Karate Kid show how focus, effort, and practice can pay off.

Fill Your Head with Scenes of Effort and Dealing with Setbacks

You can use movies to fill your head with images, mental models, and examples of extreme effort.  When the chips are down, you can then draw from these scenes to inspire yourself to go the extra mile and really put in the effort required.

The key is to build a collection of inspiring movies and scenes that put a premium on effort and dealing with setbacks.

This is a big deal because just positive thinking or positive fantasies don’t help.  In fact, they work against us.  Here’s why:  positive visualization ignores dealing with setbacks.  Additionally, we’re less likely to put in the necessary effort to make our fantasies happen.

In the book, 59 Seconds: Think a Little, Change a Lot, Richard Wiseman writes about the negative impact of positive fantasies and visualization.

Wishing your way to better grades, or using the force, just doesn’t work.  It’s effort that pays off.  Wiseman writes:

“The experimenters asked the students in both groups to make a note of the number of hours they studied each day, and monitored their final grades.  Even though the daydreaming exercises lasted only a few minutes, it had a significant impact on the student’s behavior, causing them to study less and make lower grades on the exam.  The exercise may have made them feel better about themselves, but it did not help them achieve their goals.”

Just visualizing that everything goes your way doesn’t help.  It’s better to actually imagine potential setbacks or issues that you will have to deal with.  Rather than ignore things that can go wrong, embrace them.  Wiseman writes:

“During the work, the women were asked to imagine how they might behave in various food-related scenarios such as going to a friend’s house and being tempted with tasty pizza.  Each of their responses was categorized on a scale ranging from highly positive to highly negative.  After the women were tracked for a year, the results revealed that those with more positive fantasies had lost, on average, twenty-six pounds less than those with negative fantasies.”

Put in the Effort and Anticipate Setbacks

You can improve your success by putting in effort and anticipating likely setbacks.  Anticipating the setbacks will help you prepare for things that can go wrong, and actually deal with them.  Wiseman writes:

“Why should it it be so bad for you to imagine yourself achieving your goals?  Researchers have speculated that those who fantasize about how wonderful life could be are ill prepared for the setbacks that frequently occur along the rocky road to success, or perhaps they enjoy indulging  in escapism and so become reluctant to put in the effort required to achieve their goals.  Either way, the message from the research is clear: fantasizing about your perfect world may make you feel better, but it is unlikely to help your dreams turn into reality.”

if you want more from life, don’t just wish for it.  Put in the effort and make it happen.  Embrace your setbacks and rise above them.  Draw from inspirational movies and find your “eye-of-the-tiger” in any situation.

You are Your Own Gym
Next Post:Leadership in the Moment