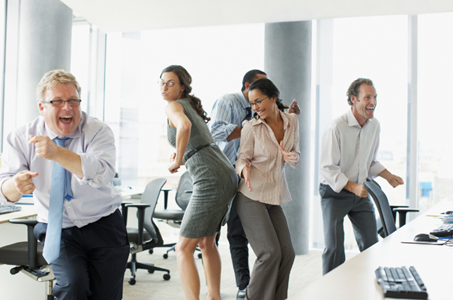 Even if you stay at your job forever, it’s good to know what’s out there and what your market value is.

At one point in my career, I was doing informational interviews once a week.  I did that for two years, before I decided that I had found something better.

Along the way, I found that the grass is not always greener, informational interviews expand your mind in terms of what’s out there, and they give you a quick health check on your marketable skills and your story.

My best career approach has always been to follow the growth, try and grow myself out of my job, and grow my job at the same time.

It’s healthy growth all around.

In the book, How to Fail at Almost Everything and Still Win Big: Kind of the Story of My Life, Scott Adams shares some of the best career advice he ever got.

Your Job is Not Your Job

“I asked what he did for a living and he told me he was CEO of a company that made screws.  Then he offered me some career advice.

He said that every time he got a new job, he immediately started looking for a better one.  For him, job seeking was not something one did when necessary.  It was an ongoing process.

This makes perfect sense if you do the math.

Chances are the best job for you won’t become available precisely the time you declare yourself ready.

Learn Something Useful for the Next Hop

When it comes to jobs, you’re on a learning journey.  It’s a journey of continuous improvement.

“This was my first expose to the idea that one should have a system instead of a goal.  The system was to continually look for better options.

And it worked for the businessman, as he had job-hopped from company to company, gaining experience along the way,  until he became a CEO.

Had he approached his career with a specific goal in mind, or perhaps specific job objectives (e.g. his boss’s job), it would have severely limited his options.

But for him, the entire world was his next potential job.  The new job simply had to be better than the last one and allow him to learn something useful for the next hop.”

If you’ve ever been told that everybody is expendable, you’ll relate to this.

“Did the businessman owe his current employer loyalty.  Not in his view.  The businessman didn’t invent capitalism, and he didn’t create its rules.

He simply played within the rules.

His employers wouldn’t have hesitated to fire him at the drop of a hat for any reason that fit their business needs.  He simply followed their example.”

The big thing to keep in mind is to grow your portable equity as you go.

The more you grow your capabilities, the more opportunities you create.

And remember that sometimes the best job to have, is the one you grow your job into.

3 Keys to a Longer Life
Next Post:The Market Rewards Execution, Not Ideas